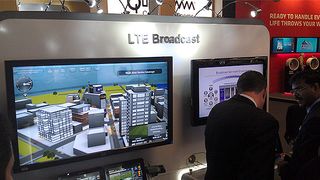 Multimedia Broadcast Multicast Service (eMBMS) is something to keep an eye on. As Dyle works hard to offer over-the-air broadcasts to mobile devices, eMBMS is on a different mission — broadcasting over 4G. If you think of 4G networks as the next-generation satellite dish, it starts to make sense; the plan is in place by companies such as Qualcomm and Samsung. But can network TV survive on 4G?

Samsung has partnered with Anritsu and gone through extensive testing in the past several months. The company is now stating that eMBMS is now ready for prime time. Samsung has successfully tested clear reception capabilities of LTE Broadcast services using evolved Multimedia Broadcast Multicast Service technology by using Anritsu's Rapid Test Designer (RTD) and MD8430A to basically simulate the LTE network environment. One advantage is that the system allows carriers to adjust the coverage as well as the capacity in an as needed basis. All of this sounds good on paper, and we have no reason to doubt any successful testing that has taken place. But, the question that has to remain is: How does this tie in to bandwidth usage?

Almost every major carrier is clamping down on bandwidth, doing away with unlimited and putting caps on how the bandwidth is spent. Gone may be the days of unlimited bandwidth (remember your 3G iPhone on AT&T?) so it’s interesting to ponder how high-resolution television pumping through a 4G network, via LTE Broadcast, is going to play out. If cost was no issue, and bandwidth was unlimited, 4G makes perfect sense. The speed at which 4G networks buzz along is almost certainly made for video transmission. There’s no buffering nor waiting — just glorious TV anywhere you want to take it.

While Dyle is aiming for the same thing, it’s quick to point out that Dyle-compatible devices pick up shows over the air and don’t even touch the 3G/4G stream. But once wireless providers start monitoring, or worse throttling, for the infusion of television on a 4G network, things could get complex quickly.

But let’s not get ahead of ourselves. Dyle is starting to launch products this month, whereas LTE Broadcast is not even out of the gates. It’s only in testing mode, but it has drawn raves at events such as Mobile World Congress, and wireless providers are intrigued because it’s a new video services that really makes the best use out of their large bandwidth infrastructures. Time will tell, but as Dyle gets the press, LTE Broadcast may be catching up at some point in the rear view mirror.