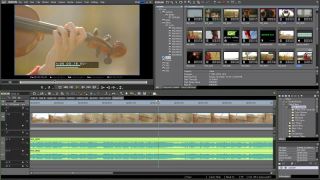 Editors looking for a fast and easy way to cut their next project (and preview their edits in real time) will be pleased to see what Grass Valley has added to its established EDIUS nonlinear editing software. Some of its latest features of version 7.0 will be shown for the first time at the 2013 Content & Communications World show in November 13-14, in New York.

The new Edius 7is now a native 64-bit application for Windows 7 and Windows 8 64-bit operating systems, taking full advantage of up to 512 GB (dependent upon Windows version) of installed memory for super-intensive media operations, such as multilayer 4K and 3D editing.

In addition to support for a wide range of Grass Valley hardware, Edius 7 is now open to third-party input and output hardware from Blackmagic Design and Matrox, with support for AJA Video Systems hardware. This gives Edius users greater flexibility to integrate into a variety of environments with one editing interface that can be used for field editing, in the newsroom and for delivery to mobile devices, Internet-connected platforms, traditional television, and for theatrical release. Edius 7 also supports EDL project import/export with DaVinci Resolve, as well as a new color grading workflow.

Edius 7 supports any mix of SD, HD, 2K, and 4K resolution on the timeline in real-time, with editing performance increasing as CPU power increases. Edius 7 has also been optimized for multicore and Intel fourth-generation Core systems.

THis latest version of Edius software will be available in Pro and Elite versions. Edius Pro 7 is targeted at the professional, stand-alone user. Edius Elite 7 is aimed at editors working collaboratively within network-connected production environments, and features seamless integration with GV Stratus nonlinear production tools and Grass Valley K2 media servers and storage with the ability for multiple edit stations to edit-in-place, record directly to K2, and simultaneously edit live video while being ingested (Simul Edit). GV Stratus integration will be available by September 2013.