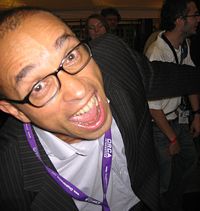 Q. Evaluate 3D one year after it was perhaps over-hyped by various industry types at IBC 2010—what is the reality settling down into?
In my opinion 3D is clearly caught in a tricky circle involving clever content creation, appropriate distribution and viewers’ ability to enjoy the service. All three topics still remain on a broader base unsolved. Some content has been produced for the movie industry and increasingly promoted in cinemas, but very often the jaw-dropping effect viewers were expecting after heavy, clever marketing campaigns are not present and the public feels a bit disappointed. 3D Sport, on the other hand, offers some nice added value with incredible slow motions and close views that truly bring the viewer into the scene, but this seems to be reserved to certain areas of the world benefiting from enough major sports leagues to make it worth viewers considering an equipment upgrade.

That might be one of the short- to medium-term problems! In a world riddled with economical and financial crisis, purchasing a 3D screen may not be the first option when it comes to spending.

Q. What broad technology trends do you think will be front-and-centre at IBC?
In my opinion all technologies linked to the ever-increasing merge between IT and TV will be at the center of interest, as well as the parallel developments of TV into Internet and especially the social networking trend.

Q. What’s new that you will show at IBC and that broadcasters should look for there?
At IBC last year we won several awards for our new product the T*AP (Television Audio Processor), which was recently used by NDR for the Eurovision Song Contest. This year we’ll show Spectral Signature, an additional feature for T*AP that offers the possibility to color sound alongside traditional pure loudness control. We are also showing our new Double Combo board, providing HD/SDI de-embedding/embedding and Loudness Control on the same board for two separate SDI feeds.

Q. How is your new product offering different from what’s available on the market?
T*AP has been designed to be of equal interest to TV and radio, as well as transmission and production. Spectral Signature offers a brand new approach to audio processing as it will analyze one’s ideal audio content (anchor’s voice, etc.), make a mask out of it and dynamically apply it to the live content. There is no need to understand how to act on each band to get a proper sound; instead, you just need o know what kind of result you’d like—Spectral Signature will do the rest. This makes it easy and efficient, as technical engineers nowadays often don’t have time to be audio specialists.

Q. Where are you based, and how many employees do you have? Anything else we should know about your company?
Jünger Audio is based in Berlin in the heart of the city’s research and university area. The company celebrated its 20th anniversary in 2010 and has 28 employees.

Q. How many years have you been going to the IBC show and what’s your fondest memory? What’s your favorite restaurant or pub?
We’ve had our own booth for 10 years and were there before that when we were sharing space with others. Of course, over such a long time we’ve got many good memories, but my personal favourite is the 2008 show and a memorable IBC party. For restaurants, I like the Blue Pepper and bars…well there are so many I can’t say which is my favourite.