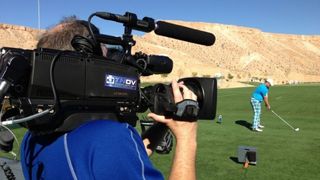 The program debuts Dec. 23 at 2:30 pm on ESPN, and it highlights the RE/MAX World Long Drive Championship that takes place following a months-long series of competing rounds. The event brings together professional and amateur golfers with rare abilities to drive balls over incredible distances — often approaching and sometimes surpassing 400yds.

The players were individuals competing against each other with one specific skillset, so TNDV used a special slo-mo camera to clearly capture dramatic shots and up-close reactions at 1000fps, with instantaneous live replay of super slo-mo footage. This allowed the producers to capture and analyze the swing technique and style of each golfer in a much more intensive method than what is possible with traditional 30fps camera technology.

OKG engaged TNDV specifically for its ability to understand and successfully deploy cutting-edge equipment, which included Protracer software to track the long drives, and super slo-mo X-MO V641 cameras with built-in replay capability from Inertia Unlimited. TNDV integrated the technologies into its traditional multi-camera production system to deliver a uniquely intimate experience that will enhance the way viewers follow the action on screen.

TNDV worked to make sure everything went as planned. It successfully integrated Protracer technology to trace golf ball flight paths and measure distances. It also worked with OKG to position POV cameras to capture unique angles and a crane for one of the cameras in the hitting grid.

The Protracer software, used in combination with an ESPN Innovations robotic camera, provided the graphical representation with a red line that followed each hook, slice and straight ball path. The robotic camera uses a smaller camera head with an ability to move left to right on a dolly track, with independent tilt and pan from remote locations. This allowed TNDV to easily track golfer movements.

TNDV also used its full infrastructure capabilities, including Harris Broadcast routers and multiviewers for video, and Studio Technologies talent boxes with Sennheiser headset microphones for audio commentary. TNDV audio engineer Adam Ellis also deployed seven AT8035 shotgun microphones for the effects mix, which he calls “the most important part of the audio program.”