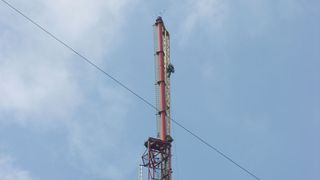 One of the most significant impacts on U.S. television broadcasters by the National Broadband Plan (NBP) will be the repacking of the UHF television spectrum. There are still many details to be settled, but one can assume that many television broadcasters will be forced to relocate to another channel even though they are not participating in the reverse spectrum auction process.

What we do not know far outweighs that which we know about the process. The rules for the auction and repacking process are under development. The preliminary details, subject to revision, were presented by the FCC as part of the Sept. 28, 2012, Notice of Proposed Rule Making (NPRM) (Docket No. 12-268).

The impact of a channel change will affect more than the transmitter. The rest of the RF system will contain some channel-specific components, such as the channel mask filter and likely the antenna. Photo courtesy ERI.The debate over the spectrum has been a hot topic well before the release of this NPRM. Through the efforts of the NAB and many state broadcast associations, Congress built in some limitations on the FCC’s ability to take away broadcast spectrum. Surrendering of spectrum, sharing of spectrum or moving from UHF to VHF must be voluntary. The commission is also under an obligation to make every effort to protect a station’s current coverage area.

The NBP originally recommended reallocating 120MHz of UHF TV spectrum, but reality indicates that less spectrum is likely to be reclaimed. Where the reclaimed spectrum is removed from the band is yet another issue.

The FCC proposal calls for reclaiming spectrum in two segments: one at the upper end of the band and another just below channel 37. (See Figure 1.) The proposal also calls for guard bands to separate the wireless spectrum from the broadcast spectrum. Splitting the wireless allocation into two segments doubles the amount of guard band spectrum required.

There are also proposals on how the white space users, wireless microphones and unlicensed devices will fit into and share the revised band plan. It will be a daunting challenge to fit all of these pieces together while preserving the remaining television service.

Since the auction process is voluntary, the final amount of spectrum that can be reclaimed will be determined by the number of stations that volunteer their spectrum at an economically viable price. A second determining factor will be finding a wireless bidder willing to pay more than the broadcaster’s threshold selling price.

There are many unknown factors to this point, but a channel repack plan cannot be formulated until the auction process is completed and we know how many (and the location of all) channel assignments are to be vacated by stations.

The plan submitted by Congress calls for the funding of the repack to be paid out of a $1.75 billion allocation from the auction proceeds. Congress has also decided that the repack process should take no more than three years from the time that it starts. How the cost or time duration was arrived at is anyone’s guess. There may be some flawed assumptions in their decisions, which we will discuss later in this article.

Two years will likely pass before the auction process begins, but it is not too early for stations to think about how the repack will affect technical plans.

Many RF plants could be 20 years old if we assume that repacking will begin in late 2016 and take three years or more to complete. Transmitter technology has advanced significantly in recent years and will continue to do so. The tube and solid-state technology used in most early DTV transmitters is now obsolete, and with the exception of limited spare devices, unsupportable. Recent technology is also more efficient, resulting in lower power consumption.

Another unknown is how far the repack will move your channel assignment. Most UHF transmitter technology, whether tube or solid-state, is segmented into three frequency bands. Transmitter age and depth of frequency change will have a major effect on whether a station’s transmitter can be channel-changed or needs replacement.

Let’s consider how long it might take to implement a channel change that requires a move from one band segment to another for a transmitter with current technology. A transmitter with IOT technology will require new tube cavities and a new solid-state driver module. Conversely, a solid-state transmitter will need new power amplifier modules and RF combiners. The estimated time for such changes ranges from two to five days of downtime. A second, backup transmitter is required to keep stations on the air while these changes are being made.

The impact of a channel change will affect more than the transmitter. The rest of the RF system will contain some channel-specific components, such as the channel mask filter and likely the antenna. A station that uses waveguide or even rigid line might need to replace these components.

A mask filter upgrade might be the easy part, but replacing the antenna, transmission line or both will require a lengthy process and involve placing a temporary system on the tower. The old system is then removed, and the new systems can then be installed, tested and made operational before the temporary system is removed. This entire process will typically involve an average of five weeks of on-site work by a qualified tower crew.

Earlier I stated that some of the assumptions that led to Congress requesting that this be completed in three years could be flawed. According to tower company American
Tower, there are only 14 qualified U.S. tower crews available to change out television broadcast antennas. Considering that it takes an average of five weeks per station to change out a system, 14 crews could only change out 434 stations within the three-year mandated window. This assumes no vacations or holiday downtime.

How many stations will be required to move is anyone’s guess at this point because no repack channel plan has been presented.

Each station affected by the channel change will be faced with a number of issues during the process. Chief among these issues will be how to stay on the air during the channel change. In most cases, it will require the complete replacement of the transmitter. This drives the question of building space and sufficient power for two transmitters, which will lead to site surveys, potential architectural changes and new building construction — and don’t forget possible zoning changes. Tower changes might also require zoning changes in lieu of building changes.

The tower structure must be capable of supporting the addition of the temporary antenna system while the main system is being changed out. Things have changed since the analog to digital transition, notably upgrades to TIA/EIA tower specifications.

TIA/EIA-222-G, the national standard’s seventh revision for Steel Antenna Towers and Antenna Supporting Structures, became effective Jan. 1, 2006. A tower study early in the game will show what effect the new standards might have on a station’s tower structure.

Physics may also have an impact on the project. A station moving lower in frequency will see the size and weight of an equivalent antenna increase. Those forced to go to a smaller, lighter, lower gain antenna will likely need more transmitter power to provide equal coverage.

While Congress has made provisions for reimbursing stations that are forced to change channels, the FCC has not put final rules into place for such reimbursement. It has stated that it will not reimburse for lost air time.

The NPRM suggests that reimbursement could be based on actual costs paid when the project is completed, or on an estimate prior to commencement of the construction. In either case, have a plan in place and be prepared to have a viable and defendable estimate for making the channel change.

So what might be covered? Here is a list of expenses that are likely to hit a project budget:

The FCC began to address the rule-making process for the auctions and repack with the release of the NPRM on Oct. 2, 2012. You, your station’s management and owners have the opportunity to influence the outcome of the rule-making process by filing comments to the NPRM prior to Dec. 21, 2012. Reply comments will be accepted until Feb. 19, 2013. Engaging in the dialogue and making your voice heard is an important part of ensuring the future of this great broadcast industry.

While some voices from government and the wireless industry have made the spectrum
repack seem like it will be the proverbial “walk in the park,” it must be pointed out that we still have more unknown challenges than known facts. A major item to be resolved is the spectrum treaties that affect all U.S. areas within 200mi of the Canadian and Mexican borders. It is already known that harvesting spectrum and preserving U.S. television allocations in some of these areas will be a major challenge.

Another challenge is how to stage and implement the channel changes that have a relational effect on neighboring markets. Do we start on both coasts and work towards the Midwest, or do we start in the Midwest and work towards both coasts? Whatever the answers are to these issues and the resulting rules to regulate the auction and repack process, it will be interesting times ahead for station engineers, management, industry suppliers and contractors.