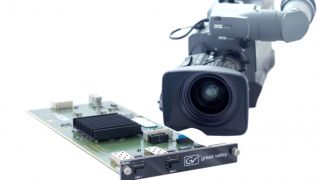 Riedel Communications, a German company known for its fiber-based intercom and media network solutions, has added new capability to its MediorNet fiber network for users of Grass Valley HD cameras that allows the camera to be linked into the network and configured remotely. Once a connection is established, last-minute camera configurations and individual controls can be performed remotely, in real time. This eliminates the need for extra fiber or triax cabling, which is usually used for camera control and requires extensive manpower and time.

MediorNet is Riedel’s latest fiber-based network for HD video, audio, communications, data signals and integrated signal processing. The company has developed a new circuit card for the next-generation networking technology that loads into the MediorNet mainframe and occupies a single card slot with at least two high-speed ports.

This new MediorNet card (model MN-GV-2) features two Grass Valley 3G fiber ports that can be connected to either a Grass Valley camera or its respective CCU base station. The mainframe sits between the camera (any Grass Valley LDK and the new LDX series model) and base station, and allows any camera on the network to be assigned (at the unit’s control panel) to any base station without having to change or re-install cable. This is extremely helpful to mobile production companies that currently use the Riedel networking solution, according to Andreas Hilmer, director Marketing & Communications at Riedel, as well as others who might consider a new way of managing and controlling the signal transport and crew during live productions.

Hilmer said the standard fiber transceivers they’re using have a minimum optical budget of 18dB, allowing for HD signals to travel up to 25mi. Even longer distances can be achieved, he said, with special amplified transceivers.

“The MediorNet protocol was specifically developed for uncompressed, real-time transport of multiple HD video, audio, intercom and Ethernet signals within a network,” Hilmer said. “And the camera interface card does a lot more than just transporting the SDI signal. MediorNet is fully replacing the camera cabling, which means the card is also transporting the return video feed, the embedded audio, the intercom, the tally and the camera control data — basically, anything you’d traditionally transport over triax.”

“We see great enhancements and savings for both studio and mobile production,” Hilmer said. “The flexible assignment of cameras to base-stations/CCUs without any changes in cabling is a huge time-saver in changing studio set-ups as well as in mobile production. Just imagine this: you can collect all camera signals in a stadium via MediorNet. To link the mobile production truck to the stadium, you only pull one single fiber and you have all the cameras connected to the truck. This includes all audio and all the communications as well. I can’t think off anything more efficient.”

Speaking of long-distance camera control, the company’s MediorNet system was recently used for the historic 120,000ft skydive from the edge of space. Riedel Communications supplied the entire communications solution for the event, integrating both wireless and wired digital intercom systems, inside the Red Bull Stratos capsule as well as on the ground.

Indeed, the company supplied the fiber-based video and signal distribution as well as the wireless video links from the capsule’s onboard cameras — enabling the stunning pictures captured during the entire descent.

All video signals on ground were distributed and routed with Riedel's MediorNet technology. A total of 24 Riedel MediorNet nodes were installed in a redundant ring topology to provide maximum reliability. In case of a potential connection loss between two nodes, the signals would have still been distributed due to the redundant topology.

The connection to the launch pad of the capsule was also supported by two MediorNet Compact frames, which were connected into the main system with Riedel’s PURE, a tactical fiber cable for demanding mobile applications that features rugged Neutrik OpticalCON Quad connectors.