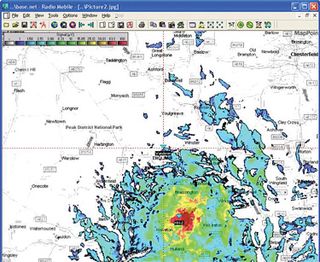 This month I'll update some topics discussed in recent RF Technology columns. I'll look at some of the work in Europe to harmonize TV broadcasting and wireless bandband/cellular systems. I'm running into an issue with on-channel repeaters that may be difficult to fix without more study and help from the FCC. Finally, I'll have some alternatives to the SPLAT propagation analysis program for Windows and Mac users.

Broadcasters in Europe have been looking at the role a cellular architecture could play in broadcasting since 2008 when work began on DVB-NGH, or "DVB Next Generation Handheld." The article "DVB Next Generation Handheld" in the December 2010 issue of tech-i from EBU Technical provides an excellent overview of DVB-NGH and its relation to the latest DVB terrestrial DTV standard DVB-T2.

Fig. 1: Radio Mobile coverage map from G3TVU's web site that includes attenuation based on land-use data. Two approaches under discussion in the EBU Technical Committee are a second generation system based on DVB-T2 that improves "mobile TV ruggedness" by 7 to 10 dB and offers "light indoor" coverage (90 percent of locations) up to 30 km (just under 19 miles) from the transmitter site. It would use OFDM and additional error correction. The second approach is more telco-oriented and would be aligned to "an evolution version of LTE-E-MBMS" that would be developed in cooperation with the 3GPP telco group. Use of efficiency-enhancing technologies such as MIMO (multiple input, multiple output) with cross-polarized transmitting and receiving antennas is being evaluated.

It is important to note that the EBU article proposes the two approaches co-exist. As the revenues from Mobile DTV grow, the system would transition from a low-cost broadcast network to a denser network with more transmitters. DVB-T2, with its Future Extension Frames, makes this easier in Europe than here. One of the things I don't think we want to lose with a next generation ATSC system is the inherent robustness of the existing broadcast model, which means the next generation system here may look more like the FLO network than a 1xEVDO cellular network. The flexibility of LTE may make it possible to overlay both models in the same spectrum, depending on spectrum availability, population density, and revenue.

I'm sure most of you have read Charlie Rhode's columns discussing the problems with self interference in networks using multiple ATSC transmitters on the same channel as digital on-channel repeaters or single frequency networks. With careful selection of the transmitter location, antenna pattern and delay, the areas of self interference can be reduced to acceptable levels or moved to unpopulated areas.

When testing a distributed transmission system in New York City a few years ago I found interference wasn't as bad as predicted in areas with very short echoes where the two signals had to be within a dB or two of each other to cause interference. This was probably because the two signals did not maintain that ratio long enough for it to be a problem.

Fig. 2: CO VWEB map for KNBC in Los Angeles with an omnidirectional antenna. I've run into a more difficult problem planning on-channel repeater systems— interference to adjacent channel stations. In larger markets almost every TV channel is now in use by either a full-power TV station or a low-power TV/translator station. Unless the signal from the adjacent channel station is below the noise limited threshold throughout the repeater coverage area, it is likely the repeater will exceed the interference ratio allowed for low-power TV or translators.

One potential solution to this problem is to use only vertical polarization for the repeater. Given the low power of the repeater, the areas of interest will be mostly line of sight and depolarization should not be as much of a problem. Assuming the adjacent channel station receiving interference is located at the same site as the station being repeated, viewers are likely to require an outdoor antenna (horizontally polarized) to receive it.

The vertically polarized signal from the repeater should be attenuated. More study is needed to determine just how much it is attenuated. This data will provide guidance that may justify modification of FCC rules for repeaters (as described in my RF Technology column, "A Digital On-Channel DTV Repeater (DOCR) Service,"Nov. 4, 2009), to relax the adjacent channel D/U ratios in certain circumstances.

PROPAGATION MODELING IN LINUX AND WINDOWS

I continue to get email from readers having trouble running the SPLAT propagation analysis program under Windows. My recommendation is to install Linux as a virtual machine in Windows using Oracle's VirtualBox.

If that isn't acceptable, check out Roger Coudé's (VE2DBE) Radio Mobile program. For help installing and running it, Ian Brown's (G3TVU) web site should answer most of your questions. I haven't had a chance to play with Radio Mobile but after reviewing the documentation from Ian I see it has the ability to use both azimuth and elevation antenna patterns (I'm not sure about mechanical tilt) and can do interference studies between stations, (see Fig. 1).

Perhaps the simplest Longley-Rice coverage study option is from CRC. CRC COVWEB allows you to generate a Google map on-line. Azimuth antenna patterns can be entered, but I didn't see a way to input an elevation pattern. Fig. 2 shows a COVWEB map.

As always, I welcome your comments and questions at dlung@transmitter.com.