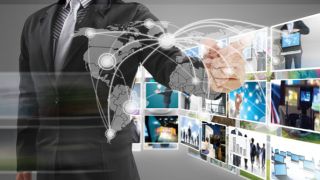 Streaming an event live has become common in recent years. Codecs, equipment and the Internet have adapted well to the needs of the corporate community. But when the team responsible for putting together this year’s Wolters Kluwer Technology Conference decided to have a virtual conference and stream content back and forth between 10 cities simultaneously, more than a few eyebrows were raised. Wolters Kluwer, a worldwide publishing and software company, wanted to cut expenses as much as possible yet still provide a quality event for its employees. The steering committee realized that just cutting travel expenses alone would save the individual business units hundreds of thousands of dollars.

Ten cities around the world were “host” cities for the conference. All of the keynote sessions would originate from the Hilton Hotel in New York City, where quality had to be excellent. In addition to New York, the other cities would be origination points for the afternoon breakout sessions. Each city would have four “conference” or meeting rooms set up to receive the afternoon breakout sessions from other cities. The biggest challenge was to find a low-cost way for each of the remote locations to transmit their sessions. The system had to be simple enough for an amateur to operate successfully.

Traditional teleconferencing systems were eliminated early because of cost. We found an economical system in New York-based Livestream. In addition to the company’s live streaming and storage capability, its streaming software had the ability to push a live camera shot of the presenter and a PowerPoint presentation simultaneously. The company also provided a separate webpage/channel for each encoding location.

Setup and testing in New York

Rather than rent video equipment in New York and produce the keynote sessions ourselves, we decided to farm out the encoding and live video production to the company’s live production crew. They were able to interface with PSAV, the hotel’s preferred AV company. PSAV operated the house audio and presentation switcher. They also rolled prepared videos for sessions in the main ballroom and provided a video feed of the screen content to the company. Livestream’s crew combined the PSAV feed with live shots from two HD cameras in their video switcher. The feed from the streaming company’s video switcher fed their encoding computers. The New York Hilton’s telcom people provided a 10MB/s private VLAN for the New York live feed. (See Figure 1.)

After determining which of our business unit locations could handle the 1500kb/s encoding bandwidth requirements, we pared the number of transmitting sites down to nine sites in eight locations. Two were in Europe and seven in the U.S. To handle the rest of the breakouts, we added a second encoding room at the Hilton Hotel in downtown Manhattan for a total of nine streaming sites. Three other cites, one in Canada and two in the U.S., didn’t have the bandwidth to encode, so they were designated as receive-only sites.

Once we finalized locations, we then began to recruit people interested in learning to use the streaming system and who would be responsible for all of the encoding at their locations. Most of the volunteers came from the local IT departments. Because our goal was to eliminate travel costs, I found myself on the phone, e-mailing pictures and diagrams back and forth, to try to determine how to help the local person set up and test everything.

We knew we would have to adapt much of what was already on-site at each local office to interface with the encoding computer. While varying in size, most of the conference rooms had a projector and some type of audio system. In every location, the projectors had standard VGA inputs and the audio systems had 3.5mm mini input plugs, designed for playing computer audio over the room speakers. This made playback simple.

To get the presenter’s mic into both the room sound system and the encoding computer, we used an external mic mixer. The presenter’s mic was input into a small mixer. One channel of the output fed into the room’s audio system for the local attendees, and the other channel fed the line-level audio input of the computer’s sound card.

A video camera was set up on a tripod and locked on the presenter, who was standing at a podium. The composite video output of the camera was input into the computer using a simple composite-video-to-USB converter. A few of the conference rooms were small and had a small number of attendees planned, so in those cases, the easier solution was a webcam with built-in microphone plugged into the computer’s USB port.

At a couple of locations, we had professional HD-SDI cameras and quad-core desktop workstations instead of laptops for the encoding. There, we opted for an HD-SDI capture card. To keep it simple and eliminate an audio mixer, we ran the presenter’s mic into the XLR input on the professional camera. This sent the audio and video signal into the computer via the camera’s HD-SDI signal. We also ran an audio output of the camera into the local room’s sound system.

A second computer was set up next to the encoding computer to allow instant messaging communication between the tech leads and me during the sessions. The communications operator also handled questions submitted by attendees over Twitter.

About two months before the event, we scheduled several live testing days when everyone would have all of their equipment up and running at the same time. Since we couldn’t get access to the Hilton in New York, I provided an HD feed from my WK Business Unit’s TV studio in Kennesaw, GA. After much testing and the handling of the inevitable glitches, the tech leads became more comfortable with their equipment and Livestream.

While there were a couple of stumbles in the beginning, issues were quickly rectified, and the conference material was delivered on schedule. At any given time in the afternoon, there were eight simultaneous sessions being transmitted across the Internet to cities and viewers across the globe.

With more than 560 people from all over the world registered, the conference began at 9 a.m. Wednesday, June 27, and closed successfully at 5 p.m. Friday, June 29. By that time, participants had seen four major keynote sessions and close to 60 breakout sessions from around the world thanks to the hard work and dedication of dozens of Wolters Kluwer employees. Streaming of live events is nothing new, but conducting a live event with content originating from different cites at the same time was both successful and fascinating.

—Ben Cleary is the Manager of Audio Visual production for CCH Small Firm Services, a Wolters Kluwer business in Atlanta, and Tech Lead for the WK Technology Conference.