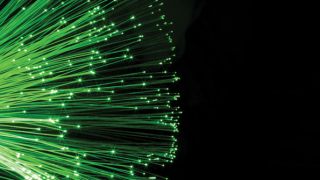 Bandwidth is not infinite, at least not in our restricted media technology enterprise. Cost and innovation are drastically affected today by our ability to interconnect signals of many types over distances no shorter than what we have been used to with coaxial video interconnections. While copper-based interconnection technology has key roles in modern facilities, increasingly optical fiber has important attributes that facilitate technology that traditional wired infrastructures cannot duplicate easily, or at least over practical distances.

From a technology standpoint, we are evolving away from infrastructures in which a single wire (or, more properly, cable) carries a single signal. Most current wiring diagrams show real devices connected by point to point, almost exclusively unidirectional pathways. This is because the signals carried are analog in physical nature, even if signals like SDI and AES digital interconnections are considered.

To make those baseband digital signals work requires sending analog modulation on the bearer, whether coax, paired wiring or fiber-optic cable. As we increasingly embrace IT-based technology, network technology allows us to overcome key aspects of the current interconnection model. First, to fall is the unidirectional nature of baseband interconnections. Second, and particularly affected by optical interconnection methods, more than one signal may be carried on a single cable. In fact, multiple signals can be carried in both directions on a single cable. This has broad implications for the topology of interconnection in single-site operations, as well as in multiple-site operations.

It is important to note that while analog and digital baseband signals occupy significant bandwidth in a cable, optical techniques are not normally amplitude modulation of the light, but rather FM, or more properly pulse modulation of FM. A second important factor is that the “carrier” frequency, i.e. the frequency of the light, is much higher. How high? A typical 1300 nanometer laser is about 230,000GHz. That means a lot of information can be modulated onto one beam.

On my desk I have a short sample of fiber that is now more than 10 years old. One PVC “pipe” carries 864 fibers, each of which can be DWDM modulation. By my simple math, that is 110,592 wavelengths in a bundle that could run short or long distances. That makes any coax look puny.

There are other reasons why fiber is attractive for connecting television signals. First, fiber is immune to electromagnet interference and, hence, works well in high RF environments where coax is at best difficult to use. It is lighter in weight, does not carry an electrical current (or ground current either), does not radiate energy, is quite small and can be used in corrosive environments.

But, there is always a catch. There are mitigating factors that in some applications make fiber a difficult choice. In some applications, particularly where high capacity and short distance connections are needed, fiber can be much more expensive than copper interconnection.

Copper is easier to install where “splices,” or connectors, are needed. Copper can also carry power where fiber cannot, which is particularly important in some applications. SMPTE standardized fiber-optic camera cable for HDTV applications many years ago, but specified to power conductors and two twisted pairs in the cable to facilitate both power and communications. That hybrid camera cable has been quite successful at providing the best of both worlds — the convenience of copper and the capacity of fiber connections.

There are other questions that enter into any decision tree when considering fiber interconnections. Does the “cable” need to carry bidirectional signals copper losses? If long distance or high capacity improves the business case for the investment, fiber wins. If resistance to mechanical stress, like under foot or around tight bends, is needed, then copper might be better.

To be sure, there are “tactical” fiber solutions invented for military installations and routinely used on the battlefield. Though not quite as dangerous, ENG and EFP applications commonly use tactical fiber interconnections, which can be as rugged as copper and work at much longer distances.

But to me the question always comes back to this: Where is technology headed in the long term? I strongly believe that the evolution of the industry is away from point-to-point signal routing and is moving toward networked topology for all kinds of facilities. TCP/IP (or UDP/IP) predominate today, and likely will for some time into the future as media networking schema. Their longevity is only enhanced by the Audio Video Bridging (AVB) standards initiative.

It won’t be long before video server ports won’t have separate input, control and output connectors, but rather a single connection to the network. Cameras won’t need return feeds, teleprompter feeds, and RGB/YRyBy and monitoring outputs. Rather, they’ll need a single optical connection that carries everything, including communications, metadata from the robotically controlled pan head and focus data from an operator in a remote location.

The potential implications of this for our industry cannot be overstated. Many hardware platforms would likely move to software-centric, and manufacturers of IT hardware would play even more strongly in broadcast and media facilities. Because of movement towards 4K imaging, 3-D applications and the huge bandwidth needed for high bit depth at high resolution, it is fair to assume that copper interconnections will continue to wane, and fiber will be strongly ascendant. Our industry will be vastly different, and the change will be for the better.