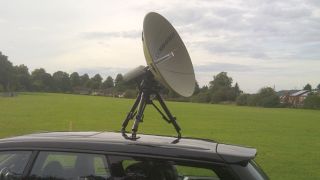 News remains a central genre for broadcasters, and as new markets and new delivery platforms emerge, broadcasters are expected to provide 24/7 coverage for rolling news channels and increasingly sophisticated websites. In an era of tight budgetary control, that means controlling deployment costs while responding ever faster.

Traditional methods for establishing live links — such as point-to-point microwave and satellite newsgathering (SNG) — continue to dominate. There are, though, newer methods based on IP delivery, and we are seeing these beginning to get a foothold in the contribution market.

Using an IP platform has a number of benefits, including:

Today the most common IP platform is the range of 3G/4G bonding systems, which use multiple cell phone data channels to send and receive material. These are quick to set up, so they often work well as a first response solution. However, they can be unreliable, particularly at large events where the systems are competing for bandwidth with the general public. Bit rates are typically below those normally considered for even SD quality. The introduction of 4G has alleviated this a little, but as general uptake of 4G increases, the problem of network congestion is likely to re-emerge.

Another solution rapidly gaining traction is the use of Ka-band IP-over-satellite systems. Introduced to provide high-speed Internet connectivity to remote communities, these systems can also be used to provide HD broadcast-quality live paths, plus Internet and IT facilities, at a fraction of the cost of “regular” Ku-band SNG terminals.

Ka-band operates at extremely high frequencies — in the 30GHz range. This enables the satellite spot beams to be much smaller than those typical of Ku-band.

In turn, this enables the frequencies for each beam to be re-used in different spot beams without risk of interference. This significantly increases the capacity of the satellite.

The latest Ka-band satellites have 38 times the data capacity of a comparable Ku-band satellite. The extra capacity not only reduces costs, but also it minimizes contention, the number of people sharing access to the system and thus competing for its resources. This is important when streaming video.

The gain of a dish antenna is proportional to the frequency being used. At the high frequencies of Ka-band, you can use a smaller dish to get an equivalent power output up to the satellite. It also means the RF amplifier requirements are reduced.

This all combines to significantly reduce the size, weight and power requirements of the terminal, meaning it can be transported in a regular car or flown as checked-in baggage. Carrying the equipment rather than waiting for it to be shipped makes for faster deployment.

Finding the correct satellite and then optimizing the antenna alignment is traditionally a skilled job and requires an engineer with complex and expensive equipment such as a spectrum analyzer. As the latest Ka-band systems are designed for home installation by unskilled personnel, much of the alignment process has been considerably simplified by the system design.

In Europe, Eutelsat provides a free iPhone app for locating its main Ka-band satellite, KA-SAT; holding the phone up to the sky shows the user exactly where the satellite is located.The user simply sets the dish elevation to the displayed figure and points to the area of sky indicated. The transceiver then emits a tone to guide the final optimization of elevation and azimuth. Ka-band services use circular polarization, so there are no issues with cross-polarization associated with traditional Ku-band systems.

Once the terminal is correctly pointed at the satellite, it automatically logs on to the system and, in a matter of a few minutes, is ready to be used. Initially, it gives a low-bit-rate connection to the Internet, allowing access to a booking portal for reserving higher bit rates.

The traditional downside of Ka-band has always been its susceptibility to rain fade. This is because, as a general rule, the higher the frequency of an RF signal, the more it is absorbed by rain. The latest systems compensate for this by running with significant spare capacity in clear sky conditions. In severe rain, the system will automatically drop to a more robust modulation scheme. It means the user will notice a drop in available bit rate, but should still remain on-air.

Let’s look, then, at a typical system designed for HD newsgathering. The minimum requirement should be for data rates of around 9Mb/s upload and 20Mb/s download, which gives comfortable headroom even when live to air.

The antenna will be in the 0.6m to 1.0m range. A 0.75m dish will give the required performance in most conditions. Most of the major manufacturers have Ka-band flyaway and vehicle mount antennas of this size in their product ranges. This links to the transceiver, which will probably be 3W to 4W. It will mount directly on the antenna and connect to the data modem by L-band RF cables, although some systems now use a single standard coax cable.

The IP-over-satellite modem will depend on the choice of satellite system. In addition to converting IP data to satellite RF, it will also supply power to the transceiver. The video data, in turn, comes from an IP video encoder, again widely established and proven technology.

The complete system is likely to weigh less than 44lb and pack into a single case, meaning it would not be a serious problem to take it as baggage on a commercial flight. Power consumption will be in the range of 60W to 70W, so the journalist could carry the system to a news location, rig it in a rental car and run it from the vehicle battery.

Most important, all this technology is available today and proven in use. Major broadcasters are taking advantage of the agility, flexibility and cost savings that IP over satellite delivers.

One broadcaster covered the Greek general elections using a single 70cm Ka-band antenna clamped to a railing on the roof of the journalists’ hotel. Using the bi-directional IP platform, they were able to provide simultaneous live reports for domestic and international television bulletins; off-air feeds of competitor broadcasters and local Greek TV; FTP transfers of edited packages; live radio reports; FTP transfers of edited radio packages; full access to the newsroom IT system; and Web browsing and e-mail.

All this was accomplished using a transceiver and modem combination, which cost $500. It makes an attractive alternative to SNG!