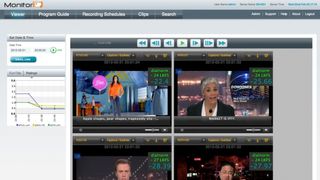 Now that the CALM Act is the law of the land, broadcasters have no latitude regarding audio levels. To ensure that the are in full compliance with Congress’ mandate, Fisher Communications, a broadcast communications and media company based in Seattle, WA, recently announced that it has chosen Digital Nirvana’s Monitor IQ Essentials 3.0 package as its tool set.

Monitor IQ provides Web-based, HD/SD channel monitoring, logging, compliance and diagnostics/QC, as well as archiving of content recordings for up to 90 days. Monitor IQ Essentials is one of four versions designed to tailor Monitor IQ to the varying requirements of broadcasters.

“So far, we’ve installed Monitor IQ at three of our stations, including KOMO-TV4 in Seattle and KATU in Portland, OR, in 2011, and KBAK-TV in Bakersfield, CA, this year. Our plan is to eventually deploy it across the entire station group,” said Lee Wood, regional director of engineering for Fisher Communications, in Seattle, WA, which operates 13 full-power and seven low-power television stations across the U.S.

Compliance checks will be the responsibility of each station in the Fisher group, but Monitor IQ’s database function will allow management to check in on the database of any member station to make compliance regulations are being followed.

Has the loudness battle been settled, once and for all? Stay tuned!