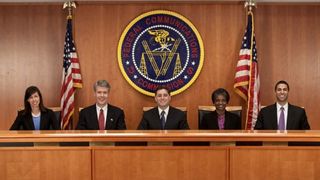 The FCC has released new rules that will allow cable operators to encrypt all their basic channels. However, the new rule comes with a major exception: Any encrypted basic channels must be also made available unencrypted via IP.

FCC Chairman Julius Genachowski circulated the new rules in August, allowing cable operators to encrypt basic tiers. However, in July, Boxee and others complained about the inability of their Internet devices to access programming on basic tiers once the content is encrypted.

In response, the National Cable and Telecommunications Association (NCTA) said that it thought the Boxee concerns were misplaced. However, the group’s six largest members agreed to make a three-year commitment to ensure retail Internet devices could receive a signal.

The FCC’s new rule includes a three-year sunset on that commitment to maintain compatibility with retail boxes, but allows the Media Bureau to extend it if it sees fit. “We believe that a future review of these rules is warranted because the market for these IP- based devices is nascent and it is unclear whether consumer demand for this equipment will flourish,” the FCC said.

The commission will initiate a review two years after the release of the order to decide whether IP device protections remain necessary to protect consumers or whether it is appropriate to sunset the protections.

For cable operators that choose to encrypt the basic programming, subscribers must be provided STBs without any additional service charges related to the equipment. Free equipment is provided from two to five years, depending on what package a subscriber has or if he or she qualifies for Medicaid.

The cable industry wanted the rule changes. The only real losers in the deal, reports said, are the few subscribers who actually use the Clear-QAM tuner in their TV or use HTPC software that’ll never get an update.

“The Commission removes regulatory barriers that prevented cable companies from remotely activating service and forced consumers to wait for the cable guy to show up at their homes,” said FCC Chairman Julius Genachowski.

“At the same time, we ensure that encrypting cable signals won’t limit consumers from using an ever-growing number of Internet-connected, third-party video devices, and keep barriers low for video device innovators. We make clear that cable companies can only encrypt their signals so long as these important pro-consumer, pro-innovation protections remain in place — to decouple the two components of the Order would shortchange consumers and innovators.”

“The ability to service consumers remotely will benefit cable operators serving rural areas — many of whom are ACA members — where costs to send employees on service calls are higher than for operators in urban areas because of the greater geographic distance between consumer locations,” Polka said. “Equally important is that the FCC ruling will mean that cable operators can expect to see a reduction in theft of service, which should benefit paying consumers who are effectively shouldering the costs imposed by signal thieves.”