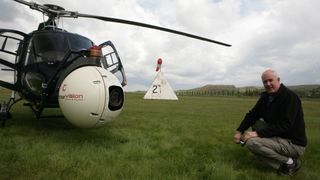 One assignment was over the sand, lava fields, mountains and glaciers of Iceland. The director needed to get plate shots from a special helicopter/jet aircraft flying through the country’s very narrow canyons. He liked the look of cutting the frame rate to 12fps, so the look of the aircraft would be twice as fast as normal.

Dropping the frame rate made the stability of the Eclipse vital. Any instability in the camera platform would show up two-fold because they had to shoot two different types of plates. One was the horizon level during the entire flight through the canyon. The other was banking the platform’s horizon as it flew around corners, simulating the look of a banking aircraft. The Eclipse worked perfectly.

Nowell’s task included capturing plates similar to the canyon shots but up above the clouds, simulating the look of a jet aircraft at 600mph flying through and around them. This meant dropping the frame rate even less, 4fps or 8X normal flight speed. The precision of the Eclipse controls allowed the ability to operate the system very, very slowly, to simulate the desired effect.

Nowell’s exciting frame rate change shots were for a major feature to be released mid-2013. He has also shot aerial footage for recent releases such as “The Avengers,” “Savages,” “X-Men: First Class,” “Green Lantern” and “Air Racers 3D.”