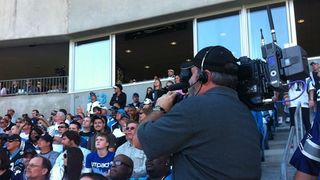 When the Carolina Panthers put the finishing touches on the HD upgrade to the team's in-house video control room in time for the start of the 2012 NFL football season, it turned to Nucomm’s CamPac2 (CP2) wireless camera system for its wireless transmission needs.

The Panthers purchased two complete RF systems, including Nucomm‘s CP2 camera-mounted transmitters and DR2 diversity receivers with camera control. The new RF system, along with a custom remote-location antenna mounting provides the team with solid wireless coverage throughout Bank of America Stadium, including in locations not previously accessible.

The Carolina Panthers employ the two CP2 systems during in-house gameday video presentations as well as sideline game coverage. The wireless systems also are used for pregame activities, including a tunnel walk with the players, on-field presentations, the national anthem and the coin toss. During the game, the wireless systems are the main components for fan cams and fan-participation experiences.

The wireless systems give gameday directors more flexibility in providing a different perspective on the field, in the stands and around the stadium than static cameras located in traditional “hard” positions.

Nucomm’s CamPac2 (CP2) wireless camera system is a tri-band-capable unit that operates in the unlicensed 5.8GHz band, as well as the licensed 6.4GHz and 7.1GHz bands, without the need for any hardware changes. The Panthers operate the CP2 systems within the 5.8GHz license-free spectrum.