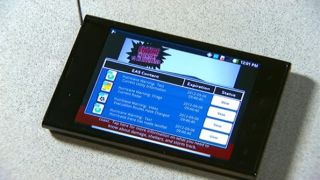 The president and CEO of WRAL-TV parent company Capitol Broadcasting Company on Sept. 13 called upon FCC chairman Julius Genachowski and the agency’s four other commissioners to embrace making reception of Mobile-EAS on every smartphone and media tablet “an issue of national importance.”

In comments made in conjunction with the nation’s first demonstration of Mobile-EAS (M-EAS) transmission from a commercial television station, James F. Goodmon urged Genachowski to assign his Technological Advisory Council to give M-EAS a thorough review. “With this technology, local television stations can use the mobile spectrum to save lives,” Goodmon said.

The WRAL demonstration, which comes after a year of testing and public demonstrations at various events, including the 2012 International CES and the 2012 NAB Show, was conducted by the Raleigh-Durham, NC, station for state emergency management personnel, representatives from NCDOT, the NC Highway Patrol, local police, the American Red Cross, the Salvation Army and a North Carolina senator.

“Beyond the challenges of scalability and reliability, the current commercial mobile alert system (CMAS) only allows for 90 characters of text,” Goodmon said. “That isn’t even a tweet’s worth of information. We can and should do better for the safety of our people.”

Goodmon added WRAL is committed to rolling out M-EAS once the Advanced Television Systems Committee (ATSC) completes its standardization process for the mobile emergency communications system. M-EAS will be an extension of the A/153 Mobile DTV standard that will make available rich media, such as maps, emergency evacuation instructions and weather radar, to M-EAS equipped receivers.

Public Broadcasting Service (PBS); LG Electronics, which developed M-EAS receivers; its Zenith subsidiary, which provided technical support and funding for the project; and Harris Broadcast, which has played an instrumental role in M-EAS development and other public demos, provided expertise and assistance to WRAL for its demonstration.

The event was hosted by the North Carolina Department of Public Safety Emergency Operations Center and was live-streamed on WRAL.com. It also is archived online.