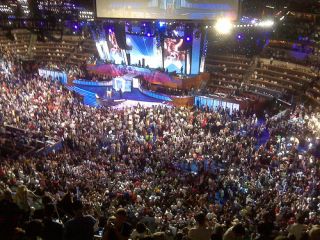 In addition to the press pool feeds, BSI will also support other network-specific broadcasts during the conventions. At the Republican Convention, BSI will provide RF technology and services for the CBS News and PBS “NewsHour” broadcasts.

The Democratic Convention is said to be a complex event. In addition to the press pool feed, BSI will once again be supporting the live CBS News and PBS NewsHour broadcasts. The event is complicated further due to the fact that it takes place in two separate venues in Charlotte.

The convention will take place in the Time Warner Arena and on the closing night, President Obama will give his nomination acceptance speech at the Bank of America Stadium. For this combined effort, BSI will be supplying 15 HD RF camera links and wireless CCU’s, 24 MIC1500 microphones, 24 wireless IFB systems, 50 UHF handheld radios and 24 wireless PL systems.

BSI will handle the monitoring and quality control of the signal transmission and reception for all of the equipment as well as frequency coordination for both events. Six BSI engineers and technicians will be on site in Tampa and 11 in Charlotte to provide support.

“The RF environment will no doubt be very crowded so frequency coordination and reliable equipment will be paramount,” said Mark Polla, BSI’s sales and marketing manager. “This is a scenario where our proprietary technologies like the MIC1500 microphone will truly shine. We will be able to deliver the guaranteed clear, reliable signals that our customers expect.”