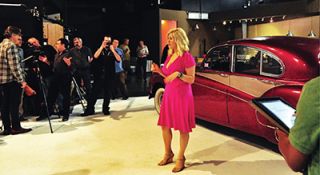 The world is flat, if you look at it from the right perspective. Home entertainment is also mostly 2D, if you view it from our U. S. perspective. But according to Al Caudullo, who is known as the “3D Evangelist,” the rest of the world is roundly formed with lots of interest in 3D in all media, becoming a market of which many domestic producers aren’t even aware.

As founder of 3DGuy Productions, Caudullo had just flown into Los Angeles from his home base in Bangkok, in August to conduct the “3Days of 3D” workshop. He was backed up by a roster of Hollywood- based 3D luminaries in front of a sold-out crowd at Michael Page’s 3D Stereolab.

Although Caudullo demonstrated his theories about 3D production using cutting- edge equipment like Panasonic’s new twin lens AG-3DP1 camcorder recording to an Atomos Ninja in Pro Rez HQ, much of the workshop’s “How to be Profitable with 3D” theme was fulfilled with his demonstration of the new 3D capabilities of Grass Valley’s v. 6.5 Edius Pro NLE software just released last June.

“Edius loves the Panasonic cameras,” Caudullo beams. “We were able to attach the P2 cards from the AG-3DP1 directly to it and begin editing their 3D material on the EDIUS timeline even before the transfer was completed. I’m convinced that this kind of 3D technology enables you to produce quality 3D on an indie budget without spending a million dollars.”

With his international perspective obtained, in part, by having instigated Asia’s first 3D filmmaking curriculum at Mahidol University in Bangkok, Caudullo is convinced that the biggest market for 3DTV is not in America right now.

“In Europe and Asia, 3D productions are selling like hotcakes,” he tells us. “My distributor, Torsten Hoffman of 3Dcontenthub.com, just closed a 3D deal with Virgin Media in the United Kingdom [and] another with CCTV in China. We’ve got 3D stuff on MTV in Hungary and on August 29, Amazon U.K. released an independent Blu-ray disk called “The Best of 3D” from 13 different filmmakers that debuted in presales in the No. 3 position, beating even the pre-sales of ‘Avatar” and ‘Spiderman.’”

Caudullo’s current 3D production is an adventure documentary, “Of Hunters and Eagles: The Golden Eagle Festival of Western Mongolia.” It’s about the Kazakh tribes reviving the ancient art of training wild eagles to be hunting companions. Caudullo shot it with the help of his wife Sompao, a native of Thailand; his fellow lecturer at Mahidol University, Dorn Ratanathasanee; and one very lucky Thai intern nicknamed “Tommie.”

Edius 6.5’s 3D capabilities were crucial to finishing “Of Hunters and Eagles.”

“That’s because its 3D workflow is so complete,” Caudullo said, “and you can use it even on a moderately powered PC to get real-time 3D playback without needing special graphics cards. For example, I’m using Nvidia’s GeForce GTX580; others are using AMD cards, off an Intel Core i7 processor.”

A presentation during the “3Days of 3D” workshop

Linking the left and right eyes is automatic.

“Edius has an Auto Pairing button, which recognizes the dual channels in the proper order and sets them up so all you have to do is a quick check, hit ‘OK,’ and you are on your way,” he said. “It will even do 4K and Red files in 8- and 10-bit color space, and works with so many codecs, it boggles the mind.”

Caudullo also recommends third-party software such as Titler Pro from NewBlue- FX to facilitate the unexpectedly tricky challenge of creating and positioning 3D titles in Z-space, and Stereoscopic Suite X1 from emotion3D that can control the depth script in a 3D shot and even adjust the position of objects within that depth area.

As a practical edit-bay configuration, Caudullo spreads his Edius user interface across two computer monitors—one generally for data and the other for bins— next to an LG or Panasonic monitor on which to view the 3D video. He’ll often switch from full-color passive 3D display mode to simple anaglyph so he can check the convergence.

“I tell my editing students all the time that what you are selling is your ability and your speed,” Caudullo said. “Edius gives you the power to be able to maximize your earnings. I’m not at all involved with its development, but I’ve used this NLE since it was called Canopus and now I’m singing the praises of Edius as a freelancer who has seen what it can do.”

“It’s true the United States is the biggest single box office for 3D films, but actually 60 percent of the revenue on most of the big movies is coming from the international market,” he says. “People have a much higher acceptance rate for 3D overseas. It’s all about getting your content out where it is going to be seen.”

That may be one reason Grass Valley handed out full licenses of Edius 6.5 to everyone who attended “3Days of 3D.” But there is meaning to their madness.

With the ripples of one major NLE’s exit from the shared workflow-oriented level of professional editing still churning the waters, Grass Valley is well aware that the nature of post production abhors a vacuum.

“There is no doubt that an opening was created,” said Ed Casaccia, senior director segment marketing at Grass Valley, “and with Edius 6.5 we have absolutely looked for ways to exploit that opportunity. More choices makes for better editing.”

Jay Ankeney is a freelance editor and post-production consultant based in Los Angeles. Write him atJayAnkeney@mac.com.