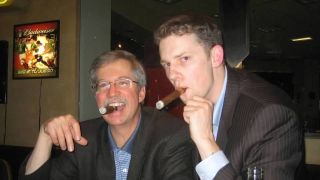 Dennis Wharton, the executive vice president of communications with NAB, announced his retirement last month. I’ve had the pleasure of working with Dennis for many years, both at NAB and as a member of the press and have found him to be among the most accessible, friendliest and committed spokespersons for the broadcast industry.

TV Technology got a chance to speak with Dennis before he exits, after 24 years of service to NAB. Here’s an edited transcript:

TV Technology: What are the biggest changes you've seen in the broadcast industry over the past 25 years? What has remained consistent?

Dennis Wharton: The biggest change has been the relentless competition from new players and new platforms. Netflix, Hulu, Twitch, Facebook, Twitter, Amazon Prime. Back in the day, a broadcast TV license was a license to print money. That’s not the case today. Don’t get me wrong—it’s still a fantastic business with great people and good margins. But it’s just a lot more challenging today.

The one constant—and the thing that makes me most proud—is the public service and the commitment to localism. Think about it—we’re free to every viewer who slaps up a $50 antenna. Free and local still means something. None of our competitors want to do that. They want our spectrum, but they sure don’t want to be free.

TVT: What was your reaction when the NAB Show was cancelled?

DW: Mainly, just sadness, no kidding, just deep sadness. I’ve been going to that show every year for over 30 years. I’ve seen the incredible amount of year-round work of Chris Brown’s Convention team. They build a city of 100,000 people for a week, put on an amazing show, then tear it down and start planning for next year. I felt really bad for them and all of our attendees and exhibitors who are part of the big NAB Show family.

TVT: What impact does the cancellation have on the future of trade shows? Do you think NAB Show NY will still go on?

DW: Unclear about NAB Show NY right now; we’ll know more in a month or so. Once there’s a vaccine for the virus, I’m confident NAB Show in Vegas will be strong again.

We were really proud of NAB Show Express, which we just concluded—this was the virtual show we put on in place of the Vegas show. We had 15,000 people register for that, and the sessions were first rate. Really, really impressive. I think that shows there’s a loyal NAB Show community that will stick with us, and will be with us when we come out of the COVID-19 crisis.

TVT: Did you tour the new NAB headquarters? What's it like?

DW: Yes, I’ve been to the new building. It’s really nice, and it sends a message to Washington that broadcasting is here to stay. We’re closer to the Capitol, which will help our advocacy. Radio and TV broadcasters will be proud of the new building, and the fact that we’ll be able to better showcase our new technology to policymakers.

TVT: How do you think broadcasters have handled covering the pandemic?

DW: I don’t think in my 24 years at NAB I’ve ever been more proud. Under the most dire of circumstances, our radio and TV stations have done remarkable work. Advertising has plummeted, and people are working in makeshift studios in their basements. But the ratings for local TV and network nightly news are through the roof. I think it’s because broadcasters are giving people what they need the most, which is credible information. They don’t get that from social media and the cable shout shows.

TVT: What will be your role at NAB going forward after you retire?

TVT: Are you confident about the resiliency of radio and TV broadcasting for the future? Certain FCC commissioners have said they will continue to look at broadcast spectrum for other uses. Do you think broadcasters need to be concerned about this?

DW: I do get frustrated by the insatiable spectrum grab from broadcasters by our competitors. That’s coming from the pay-TV and wireless broadband folks—two industries that would love to see broadcasting disappear. I can’t blame ‘em— if I could get rid of a competitor who’s giving stuff away for free that I’m charging $100 bucks a month for—I’d tried to eliminate them, too. Hopefully, NextGen TV will give us an opportunity to change the perception of broadcasting. We led the way in HDTV; I’ve got faith that NextGen is going to be a really big deal—even bigger than high definition television.

TVT: Beyond the show cancellation, how else has the pandemic impacted NAB's operations?

DW: We’ve had to make some difficult budget decisions; luckily, we had a nice rainy day fund built up that allows us to sustain the loss of this year’s Vegas Show. The challenge now is helping to keep our radio and TV members afloat during the advertising downturn. I really think that once we’re out of the crisis, the advertising economy will come roaring back—and that businesses will be spending on broadcast TV and radio.

TVT: What was your favorite part of the job? How did it evolve over the past several decades?

DW: The internet means there are no deadlines anymore, so that’s been the biggest evolution in the job over the last 24 years.

My favorite part of the job was mixing it up with reporters. I was D.C. bureau chief for Variety before I got the NAB PR job, so I think I know how reporters think. I really enjoyed helping young reporters understand broadcast law and regulation, and working to shape stories. I felt my job was to present broadcasters in the best possible light. I made it a mission to never, ever, lie to a reporter; once you go down that road, your credibility is shot forever. But that doesn’t mean you have to volunteer dirty laundry, either. I tried to be helpful to reporters, leak an occasional scoop and highlight the positives of what our stations do every day to serve their communities.

Being a PR guy at a place like NAB is not for the faint of heart. A lot of people in D.C. want to see NAB fail. When there’s a screw-up, the easiest person to blame is the PR person. But I read a quote recently from Joe Lockhart, President Clinton’s press secretary, that was so true. He said that “even the best PR people in the world can’t fix an underlying policy problem forever.” My style was to roll with the punches on the bad days, and live to fight another day. Working for folks like Eddie Fritts and Gordon Smith made things a lot easier, because they got the NAB policy positions right.