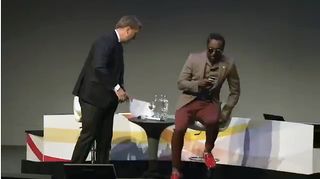 AMSTERDAM: Will.i.am came onto the IBC keynote stage at the RAI Convention Center futzing with his phone. Johan Jervøe, vice president of Partner Marketing at Intel, asked the Black Eyed Peas frontman if he was tweeting.

“No, I turned my ringer off,” the singer said.

Who would you swap jobs with for 30 days?
Will.i.am: “Anybody that works at Twitter, Google, Facebook, Intel… I would not swap jobs with anybody from I don’t want to say anything. That would be mean.”

How many kids do you want?
“Eventually, I want to have four daughters… four girls…. I think eventually, when the world is ran by women, it will be a better place. I want to to help.”

When did you last feel creative envy of something you saw?
“It happened a couple of weeks ago. Someone showed me a commercial… for a Dodge Dart. I got inspired by the commercial to write a song… It cost them like $800,000, and my version cost three Gs…. I don’t get it sometimes. You’re a big company, everything gets inflated and the kids don’t look at it.”

Jervoe then gets to broadcasting, and how the business has changed.
If you were in their shoes, what would you be thinking and doing differently?
“So first, if I was in their shoes, I would do my research, cause a lot of people forgot, that this world we’re living in—let’s stick with entertainment—entertainment at one point in time was because of technology—old technology... the record companies… RCA; the radio and the gramophone…. The broadcasters had old technology. It was RCA, too. NTSC, and Europe had PAL.
And now there’s superior technology, to where it’s instant, one-to-many instantly. People don’t want to wait around for content by appointment. They want it when they want it. They want the content to come to them, where they’re at, at any given time of the day.
I would, if I was a broadcaster, surround myself with code writers and platform builders. Like imagine Kodak. They should have thought of Instragram. Nah, they didn’t. Imagine if ABC thought of YouTube. No, they didn’t do that either. So I would quickly compete with this Ninja-stealth machine called the Web and applications and absolute connectivity.”

Jervoe asks Will.i.am, a judge on the U.K. version of “The Voice,” about being advised by BBC brass not to tweet live during the show.
“[BBC One Conroller] Danny Cohen… over at BBC, I was tweeting and he pulled me aside and said ‘Will, I’m not going to tell you to stop tweeting, but you should consider, not to tweet.’ I said ‘Yeah, but check this out Danny, the kids watch television with their phone in their hand, their tablet in their hand, sometimes a laptop, and they socialize with their friends while they watch it on TV. Some of them aren’t even watching it on TV, they’re just getting all the Cliffs Notes, and then they’re going to go online and see it later. I know there’s cameras here looking at me, but why should I ignore this other thing.’
…Then the next week, Simon Cowell started tweeting, which was cool. Because you’re engaging. You want to engage while people are at home watching TV, because that’s the ‘science;’ somebody designed how you interact with the cameras.And now, you have to design how you interact with the phone.”

How do you see creative driving technology and solutions going forward?
“We have to get out of the monetization... a lot of time, people don’t try to come up with new concepts because you’ve got the CFO guy in the building talking about, ‘how are we going to make money doing that?’ And that isn’t innovation when there’ssomebody there looking over your shoulder asking how it’s going to make money. Imagine YouTube—imagine they thought about how they were going to make money at first… it was so powerful, it was adopted by culture, and then they make money.”

The complete interview is available at IBC.org. Registration is required.
~ Deborah D. McAdams