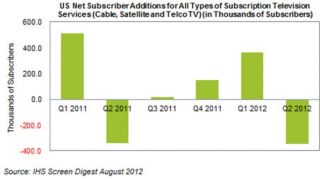 The number of people subscribing to pay TV services in the United States in Q2 fell by about 350,000 from the previous quarter, according to new data from IHS Screen Digest.

For the quarter, total basic video subscribers dropped to 100.9 million from 101.2 million in the first quarter of the year. The reason for the decline appears to be twofold: a weakening economy and inroads made by OTT services like Netflix.

“Poor economic conditions played a role in declining subscriber additions for pay TV operators in the second quarter,” said Erik Brannon, analyst for U.S. television at IHS. “Another challenge was in the competitive threat posed by OTT services, such as Netflix. Consumers are spending an increasing amount of time using Netflix at the expense of traditional services like cable and satellite, which may lessen the incentive to retain a pay TV subscription.”

The data reveal that for the quarter the number of satellite TV subscribers in the U.S. fell 62,000, the first decline since Q2 2011. Most of the quarterly decline can be attributed to a loss of 52,000 subscribers by DIRECTV, according to IHS.

“Our view that the business will remain sound has not changed,” said Brannon. “However, it is important to note the widening gulf in the number of TV households vs. pay TV households.”