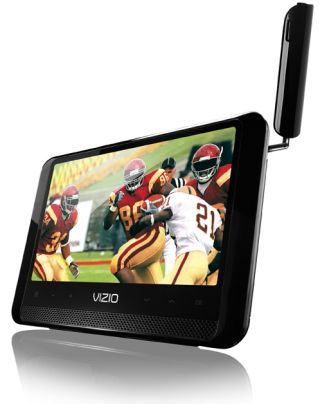 IRVINE, CALIF.: TV maker Vizio is planning to roll out a 9-inch handheld Mobile DTV receiver in January, a company spokesman said today. The device would be Vizio’s first ATSC-M/H compliant receiver. LG, Samsung and Dell have the only Mobile DTV receivers currently in use.

In the meantime, Vizio has introduced a 7-inch TV that does receive regular ATSC broadcasts. The new VMB070, an edge-lit LED LCD portable is an inch thick and sports 800x480 resolution. Vizio said it’s the first portable handheld (as opposed to mobile handheld) TV with an LED panel. It has an integrated, fold-away antenna, touch sensitive controls, a 3.5 hour battery and it “doubles as an LED picture frame.”