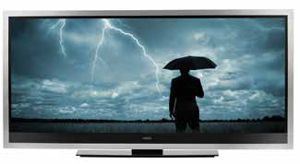 IRVINE, CALIF.: Cinephiles without the means to build their own home theaters may have reason to rejoice, but some industry observers are wondering out loud if Vizio may be stretching itself too thin—or in this case, too wide— with the set maker’s new 21:9 aspect ratio 3D TV being introduced this summer.

Vizio is the largest shipper of 16:9 LCD sets in the United States. (although it does not release actual sales figures). In early July, it rolled out its XVT Series Cinemawide LED Smart TV with 3D featuring a Cinemascope-like 21:9 aspect ratio housed within a 58-inch screen. It’s the first 21:9 unit to be sold in the United States, albeit strictly online, where (to date) it has no competition. But that might not be enough to make it even a niche success.

BYE TO BLACK BARS
The idea behind Vizio’s ultra-wide screen (model XVT3D580CM) is to allow movie buffs to eliminate those pesky topand- bottom black bars while viewing typical 2.35:1 feature-length motion pictures. Vizio, based in Irvine, Calif., began offering the unit for $2,500 at Amazon.com and Vizio.com, targeting “taste makers, movie lovers and creators to give them a much more elegant and immersive widescreen 2D and 3D experience,” according to Vizio Product Marketing Manager Carlos Angulo.

And when 21:9 owners are not viewing motion pictures? Apart from what it calls the option of an “intelligent zoom” of 16:9 HD content to fill the wider screen, Vizio thinks one popular application for its LED sets falls squarely in the smart-TV category. “Users can enjoy fullscreen, 1080p 16:9 HD television on the right side of their screens, while accessing Vizio Internet Apps in a [tablet-sized panel] on the left side of those screens” simultaneously, Angulo said.

Paul Gagnon, director of North America TV Research for NPD DisplaySearch of Santa Clara, Calif., sees 21:9 sets in the U.S. strictly as a niche category. “Philips has been selling 21:9 sets for two years [overseas] with some modest success, shipping maybe 10,000 [sets] a year, maybe more, and I wouldn’t expect Vizio to do much better than that in the United States,” Gagnon said. Philips has apparently abandoned an earlier plan (noted at recent NAB and CEA conferences) to ship 21:9 units to North America anytime soon. (The Dutch firm did not respond to numerous inquiries about its 21:9 plans.)

“As far as our current forecasting,” Gagnon said, “globally we never see the 21:9 market growing beyond about 50-60,000 units a year. We see it staying as a pretty small part of the overall TV market,” he said. “Besides, the percentage of TV sets going for $2,000 and above in America is pretty small… maybe one or two percent of all sets sold.”

Gagnon said for most Americans, bigger is usually better. “The Vizio 21:9 set at around $2,500 is more than twice the price of similar-sized 16:9 screens,” he said. “We also now have a pretty high-level concentration of flat-screen TVs in the U.S., but in a few years a lot of consumers will be looking at their next flat-screen set and then they’ll have options. One option is simply getting an even larger 16:9 screen like maybe 60 inches or more. The second option is opting for a somewhat smaller 21:9 set that’s far more expensive. We think most viewers in [North America] will opt for the bigger, less expensive 16:9 screens,” Gagnon said.

BAD TIMING?
A TV consumer looking to get a bigger bang for the buck is especially important these days, says Peter Putman, president of ROAM Consulting of Doylestown, Pa.

Apart from what it calls the option of “intelligent zoom” of 16:9 HD content to fill the wider screen (L), Vizio thinks one popular application for its LED sets falls squarely in the smart-TV category.

“The TV business, in general, is depressed right now. 3D has pretty much been a failure except in China and Indonesia, and even Connected TV isn’t doing all that well as a sales [tool], which to me is surprising,” Putman said. “The problem with 21:9 sets is the average person has just gotten used to 16:9, so a Cinemascope- like TV is not going to excite the consumer, especially since most of today’s content in 16:9 is going to put black bars all over a 21:9 screen.”

Putman, who manages the online resource HDTVexpert.com, said any company like Vizio understandably is going to sell its 21:9 sets at premium price points so it doesn’t lose money. But he said putting higher prices on any TV product right now doesn’t make a lot of sense from a consumer point of view. “Even avid movie buffs probably aren’t going to watch motion pictures on 21:9 LCD TVs. They’d probably build a home theater,” said Putman.

Putman also doesn’t see a lot of synergy potential between Vizio’s higher-priced 21:9 offering and its established retail outlets. “Vizio typically sells its 16:9 TVs to the mass market through such places as Costco and Walmart. But 21:9 sets are not geared to the mass market. Most people will look at that much higher price tag and say, ‘Hey, come on, who’s gonna pay $2,500 for a TV these days!’ There may be an application for 21:9 for the commercial markets, maybe for a certain type of custom-imaging. But I think Vizio’s 21:9 sets will very likely be gone in the U.S. a year from now.”

Vizio, for its part, won’t reveal any numbers on how its 21:9 sets are selling in these early days, but Angulo called the online launch “successful” and said the movie-friendly units “will continue to be available as long as they remain popular.”