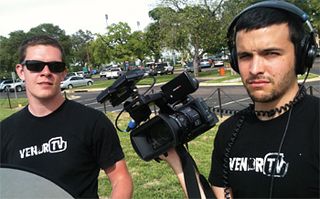 At right, VendrTV creator and host Daniel Delaney interviews a subject while his crew captures every tasty detail.
NEW YORK—When Daniel Delaney graduated from the University of the Arts in Philadelphia with a degree in design and multimedia, he thought he was going to spend the next few years of his life in London designing interfaces for a well-known social media network. These days, he's living in Brooklyn, N.Y., hosting and executive producing "VendrTV," a popular web series dedicated to "discovering the world's best street food, one bite at a time."

The idea for VendrTV sprung out of Delaney's graduate thesis about design impact on the Philadelphia food cart business. "This was before the whole food truck boom happened. We're talking about primarily foreign immigrants standing in metal boxes on the street corner," he relates. When the London plans fell through he found himself living in his parents' basement and brainstorming a new career path.

Then he had the idea: "Why don't I make a show about food carts? It sounds like an obscure idea, but when you did your thesis about food trucks and all of your friends are in media production it's kind of a sure thing."

Delaney reasoned that there was nothing unique about television that anyone couldn't replicate at home with reasonable knowledge of After Effects and Final Cut Pro. The following January, Delaney rented a pair of HVX200s and a boom mic from his alma mater and drove up to Brooklyn with a couple of his friends to film a pilot episode of (what was then) VendyTV at a waffle truck on Bedford Avenue.

"It was horrible," Delaney recalls. "I didn't know what I was doing. We were out in the cold for six hours, freezing and trying to do this show, but we really didn't have a good vision. We didn't know what to film. When we tried to edit it, nothing cut together. The sound was horrible."

Two years and more than 80 episodes later, he still only begrudgingly admits that VendrTV is "a little bit better now" even though there was obviously something different about it starting with the first complete episode, shot in early 2009 at Manhattan's Treats Truck. Delaney's delivery is upbeat and entertaining, the editing clever, and the energetic camerawork keeps things interesting. (Being on location also helps.)

Production values are just a part of the reason that VendrTV became successful so quickly. Delaney paid attention to the way successful web personalities like Ze Frank and friend Gary Vaynerchuk (host of Wine Library TV) built their shows around communities. He mined his relationships in the tech sector before launching the show, so when it came time to launch the series he had people with 300- 400,000 Twitter followers already talking about it.

For the first few months Delaney and his original crew—two camera operators, a sound op, and a PA all working pro bono—shot all over the Tri-State Area until the day nobody could make it to a New York shoot at the Papa Perrone's Pizza Truck in Midtown. Delaney turned to college friend and cinematographer Andy Buckmaster to fill in and the two clicked immediately. "It was fun because he's completely obsessive about the camera. He's very precise and I appreciate that because my focus has always been on the details," Delaney explains. "He was also coming up with fun shots, like putting the camera in the oven and getting different angles."

VendrTV recently upgraded to shooting with Sony PMW -EX1s and Canon 7Ds, increasing image quality, especially for the all-important food closeups. It was also the first time Delaney realized he could get away with shooting an episode with just one cameraman. By this time VendrTV was beginning to exhaust its resources for East Coast content, so Delaney decided to take the show on the road, starting with the Pacific Northwest. With Buckmaster on camera and long-time friend Florian Dirringer on sound, Delaney and the newly minted crew of VendrTV flew into Seattle, WA, rented a Ford Mustang convertible and drove down the 5 Freeway all the way to Los Angeles, shooting episodes as they went. "We probably shot 30 episodes in about four weeks," Delaney estimates. "In Portland we were doing three or four a day."

As the executive producer, Delaney sets up VendrTV shoots a month in advance. He tries to book all the carts and trucks on a block by block basis, sometimes spending an entire day in vicinity of one street corner. At this point they've got the routine down to a science: When the crew arrives at a location Buckmaster immediately starts shooting b-roll while Delaney preps for camera and Dirringer sets up the sound gear. "Where it used to take us about seven hours to shoot an episode, it now takes us about two and a half hours from start to finish," says Delaney. "When we were on the West Coast we used whatever we could find, which were just boom mics, but now we're using Sennheiser lavalier wireless packs. We also invested in lighting kits and bounce boards, so we kind of bumped up the production values across the board."

VendrTV also upgraded its camera package from the HVX200 to the PMW-EX1 and just recently added a 7D for closeups and food beauty shots.

Understanding what kind of content the audience is looking for is an important aspect of VendrTV's continued success. "Since we started the show I've been very focused on looking at the analytics data to see what people like and what they don't and I try to modify the show to fit that," Delaney says. "When six minutes for an episode was too long, we trimmed down the length. We discovered that the most engaging part is the food bite, so we focused more on that and less than on the interview."

Delaney stands firm on the opinion that independent content creators should be held to a higher standard. "Thanks to digital technology, the means of production are cheap enough that there's no reason that you can't be producing a Travel-Channel quality show in iMovie," he reasons, before adding, "But I don't buy into the idea that technology has anything to do with one's ability to create something substantial. It has to do with their own desires to push themselves."