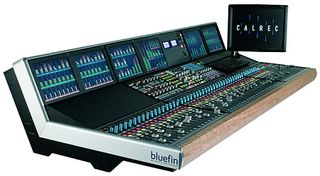 "When evaluating the consoles on the market, the key factors for us were reliability and ease of use, and we're confident the Omega from Calrec Audio will give us both," said Bruce Jacobs, chief technologist at tpt. "Calrec has a reputation for giving broadcasters DSP and controls that allow them to be creative and deal with anything that might come up during a live production. Omega's capabilities will be especially helpful in producing pledge drives, music specials, and 'Almanac,' our weekly public affairs program."

The 40-fader Omega console delivers a number of features not available to tpt with its previous console. In the studio, the Omega allows tpt to track music productions to a digital multitrack recorder. Also, because Omega's onboard memory can store up to 100 different groups of settings, operators can completely configure the system for each show and then save the configuration so it is easy to get back to later. That technical feature permits a broad range of users to switch rapidly from one production to another.

Omega uses Calrec's Bluefin technology, and it features 240 channel processing paths packaged as 72 stereo and 96 mono channels, allowing up to 39 x 5.1 surround channels. Providing greatly expanded monitoring options with full configurability, Omega also features Calrec's TFT metering capabilities across the upstand. The console was designed to have as much control on the surface as possible and to maintain the immediacy of an assignable system without compromising access.

tpt plans to have the Omega installed and in operation by Nov. 1.