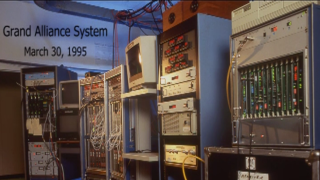 Twenty-five years ago (March 30), the integration of the Grand Alliance system for digital HDTV was completed at Sarnoff’s Field Lab, laying the foundation for its world premiere a week and a half later at the 1995 NAB Show in Las Vegas.

To mark the anniversary, consulting engineer Glenn Reitmeier, who played an instrumental role in development of the system, has posted a brief video online identifying the team responsible for the integrated system, its component pieces and historical video of the actual system.