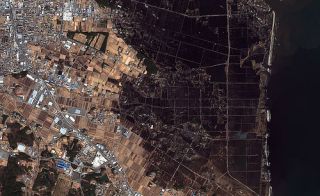 Image courtesy DigitalGlobe-Imagery
TOKYO: A magnitude 7.4 earthquake hit off the coast of Japan, prompting a tsunami warning for the nation’s northeastern coast just weeks after cities there were inundated by another quake-triggered wave. The alert was reported to be lifted as of 9 a.m. PT/1 a.m. JST, according to NHK World. Today’s tsunami warning was for a wave three to four feet high--less powerful than the one unleashed March 11, captured at left in a satellite image. While the alert has been lifted, people in coastal areas are still are being told to evacuate to higher ground.

According to NBC News, this earthquake hit 73 miles from Fukushima, where employees of a nuclear power plant have been risking their lives trying to contain the damage from the first quake. NHK World says plant officials report no change in the radiation levels around the facility as a result of today’s quake. Some power disruptions but no injuries are being reported.

A magnitude 9 earthquake hit March 11 roughly 80 miles off the coast of Sendai, sending a tsunami wave that flooded that city and devastated several others on coast of Northern Japan. Sendai is 52 miles from Fukushima.

Today’s incident comes just as Sony reported resumed operations in some of the areas affected by the first earthquake. Eight of 10 effected plants in Saitama, Tochigi, Miyagi, Ibaraki, and Fukushima Prefectures were operating again in some capacity as of yesterday. The two plants that remained offline included the Tagajyo plant, where Sony makes HDCAM SR and a variety of other magnetic tapes, and a lithium ion battery factory in Fukushima. The Miyagi Tome plant, where Sony assembles and packages all tape an disc products, resumed March 28. Sony said the Tagajyo plant was still undergoing cleaning and damage inspection.