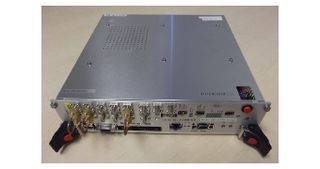 TOKYO—A trio of Tokyo-based technology developers have created a prototype white-space device based on the IEEE 802.22 Wireless Regional Area Network standard. The National Institute of Information and Communications Technology, Hitachi Kokusai Electric and ISB Corp., said they have developed IEEE 802.22 base station and consumer-premise device prototypes that operate in TV white spaces at 470 - 710 MHz.

The consortium notes that the device could be used to provide broadband in unserved and underserved areas and a backup channel for emergency communications. The United States, the United Kingdom and Japan all have white-space initiatives to deploy unlicensed devices on unoccupied TV channels. NICT, Hitachi and ISB said IEEE 802.22 systems have “10 times” the coverage of Wi-Fi, and are reliable for backup provision of broadband communications during emergencies.

Hitachi developed the physical layer that allows the devices to work in white spaces. NICT developed the medium-access control layer that provides the point-to-multipoint access, cognitive interference estimation, geo-location and white-space database access over Internet Protocol. ISB Corp. is providing the white-space database that indicates which TV frequencies are no occupied by TV stations or other licensed operations.

NICT, Hitachi and ISB said they intend to develop “enhanced technologies based on the IEEE 802.22 standard and also work closely with White Space Alliance to provide products for worldwide markets.” They intend to demonstrate the prototypes at the Super WiFi Summit in Miami, taking place Jan. 30 to Feb. 1.