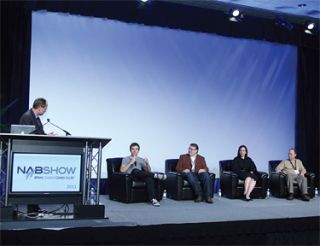 The use of special visual effects in the seemingly simple "Art of Storytelling" was the subject of an NAB Show Super Session. Katherine Hays, CEO of effects software developer GenArts, welcomed the audience and set the tone for the discussion.

"Visual effects drive audience engagement," she said. "Visual effects touch an estimated 80 percent of the minutes you see on television or in feature films."

Hays noted the explosive growth of the video domain as a target for visual effects, which were once reserved almost exclusively for feature film projects. As a result, demand is being met by an army of young artists seeking to visually support the art of storytelling.

According to Hays, "This new generation has the same need to drive audience engagement."

The panel discussion included a keynote by Larry Kaplow, writer and producer of the television series "House," who explained the importance of using visual effects to create seamless storytelling. "Some [effects] are obvious, but some are invisible, and those are the most important ones," he said.

Kaplow explained his take on the storytelling process, liberally illustrating his remarks with short scenes from "House" episodes, and stressing the storyteller's chief objective: emotional involvement.

"The trick in TV is to get [the audience] to care," he said.

Kaplow then joined a panel moderated by Bloomberg News entertainment reporter Michael White, who asked participants to highlight the differences they saw in today's visual effects market compared to five or 10 years ago. A vivid illustration was provided by USC professor Dr. Richard Weinberg, who described a five-screen, student-produced effects extravaganza so technically advanced that it was used to launch the Frank Gehry-designed New World Center building complex in Miami.

The majority of his time, he said, is spent "cleaning up things that happen on the set as a byproduct of shooting a lot of material very rapidly." Herr's team works to hide artifacts that draw attention away from storytelling. "We achieve a consistency of look," Herr said, "so you aren't suddenly thrown out of the scene."

Visual artist and animator Chris ONeill described his work at the Los Angeles office of motion graphic design company Blind on a commercial for Audi, using footage from "A7" to illustrate visual storytelling challenges in the ultra-short-form world of 30-second commercials. "You have to find the story that connects best," he said.

Panelists continually remarked on the changes their industry had seen, from a shift toward freelance "mom and pop" effects artists to the use of offshore services for rotoscoping—trends moderator White referred to as "the democratization of visual effects." © 2011 NAB