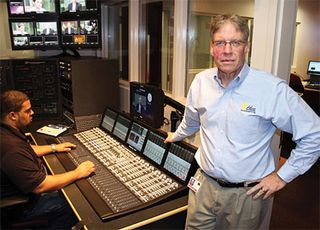 LOS ANGELES
The design considerations that typically inform the decision-making process for any broadcaster adding or upgrading audio facilities became a little more complex with the arrival of DTV. Ultimately, however, expediency and budget are more likely to trump any technical considerations.

"We did make a decision early on not to go 5.1 just because we had too much on our plates trying to launch a full-blown network, lens to satellite, in a relatively short time," said Mark Haden, vice president of engineering and IT at the MLB Network in Secaucus, N.J.

MLB Network had the relative luxury of building on a Greenfield site, which allowed implementation of an infrastructure supporting eventual 1080p and 5.1 operations.

(L-R) Karel Holness, audio engineer, and Joe Sloan, operations and production manager, at the Hope Channel production center. "A lot of companies have to build layers on top of an existing stereo environment, whether it's analog or digital," noted Haden.

CBT Systems in San Diego provided the concept and much of the design. The Systems Group was awarded the system integration job on the live production rooms.

MLB Network officially launched at the start of 2009 with each of its two audio control rooms outfitted with Calrec Omega consoles. It soon became apparent that the desk being used to produce the network's signature show, "MLB Tonight," needed more horsepower for routing and other functionality.

"We stuck with a technology and a vendor that suited our needs and we upgraded from an Omega to an Alpha console," said Haden.

There are no plans to transition from stereo operation yet, although live games on "Thursday Night Baseball" are brought in and recorded to MLB Network's file-based setup in 5.1.

However, Brad Cheney, the operation's director of engineering, noted: "Our entire structure is built and monitored for 5.1, including true surround speakers and separate PFL monitoring for sources. The entire chain exists, is operational, and is ready to go at the flip of a switch."

Looking to the future, the delivery format will be source-driven, and will not include upmixing, said Haden.

"Whether there are live elements or pre-taped shows on our server environment, in the traffic system that drives the automation it's going to say whether it's 5.1 or stereo and it will send it out in that configuration," he said.

"It may change; we might upmix the stereo stuff," Haden said. "But it's not what the purists want. And there's nothing worse than a bad upmix."

At the Hope Channel Production Center in Silver Spring, Md., a recently added HD annex was built for stereo operation.

"We broadcast to over 200 countries in the world, so we have to be mindful of the viewer," said Joe Sloan, operations and production manager at the facility, which is owned and operated by Seventh Day Adventist Church for the Hope Channel.

"A very large percentage of our viewers are in parts of the world that are somewhat difficult, and just getting color might be a big deal, so 5.1 is way out on the horizon," said Sloan.

Hope Channel's new facility, which joins a production studio built in 1986 on another floor, was constructed in order to begin an archive of HD content. But in any case, noted Sloan, "At this point, to build a studio in standard definition is very difficult, so we went with high definition."

The Hope Channel installed an SSL C10 HD console in the new audio room, which was put together in collaboration with Professional Products of Gaithersburg, Md. With only six full-time production staff in the two studios, the console purchase decision was driven by ease of use as much as anything.

"Our audio people, editors and camera operators are generally freelancers or even volunteers," said Sloan. "The board is very high-tech but very simple to operate."

Audio operators tend to be drawn from a small pool of regulars, he added.

"It can be hard to come in out of the blue, sit down at the board and do a live show," he said.

Greenspun Hall at the University of Nevada, Las Vegas includes this facility designed by Russ Berger Design Group. "So if you have somebody in there who doesn't know what they are doing they can run faders up and down and that's it. Or, you can have someone who can configure sources and be able to change routing."

The location of the audio production facilities can vary enormously—from a corner of the video control room to a dedicated, acoustically treated space. But there should be one overriding consideration, according to Russ Berger, president of the Russ Berger Design Group (RBDG).

"It always comes down to people. People have to access equipment and work surfaces, and work collaboratively," he said.

As for the physical space available for the construction of an audio room, Richard Schrag, RBDG principal, shared these thoughts.

"The models run all the way from audio in the video control room, to audio in a separate portion of the room but still in the same physical space, to having a completely separate room," he said.

He added that the desired physical and visual access and communication between the audio and video rooms dictates which model is appropriate.

There can be a tendency to squeeze the audio room into whatever limited space is available.

However, Berger, observed: "What they don't realize is that the room is such an integral function to the sound, the accuracy and the reference of what goes on. Audio requires a certain volume or you don't have the translation and accuracy."

This is especially important where 5.1 is concerned.

"If surround isn't considered until further down the road, the room may be way too small and won't allow you to establish a decent monitoring environment," he said.

Berger also stressed the need for bass management: "It allows you to place the subwoofer/LFE device in its optimum place in the room, and to place the LCR and surrounds with less concern for how they interact at low frequencies with the local reacting surfaces of the walls, ceiling and desk. That's a crusade we've been on for a long time."