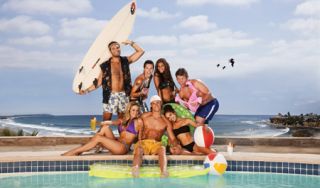 LOS ANGELES: No Los Angeles production company and post facility has been a bigger supporter of Apple Final Cut Pro than Bunim/Murray Productions, the company that helped launch the genre of non-scripted, reality TV with staples like "The Real World" and "Road Rules." Not only had they moved from Avid to Apple editing solutions, but they were also an early adopter of Apple's Xsan shared storage networks, thus helping to pioneer collaborative workflows within the Apple ecosystem.

MTV’s “The Real World San Diego” is among Bunim/Murray’s popular reality TV shows. But with the new year, Bunim/Murray Productions has once again decided it's time to make a change.

"Over this past year we've been monitoring Apple's changes to FCP X, but there has been no indication that the software would end up working in our situation," said Mark Raudonis, senior vice president for post production at Bunim/Murray. "We started to consider the alternatives and Avid was the logical choice. We had been an Avid shop in the past and since that time, Avid has become a much more responsive company, so it was time to take another look."

Starting this month, Bunim/Murray Productions will install over 100 seats of Avid Media Composer or Symphony and will nearly double the in-house storage capacity by adding Avid ISIS 5000 shared storage alongside its existing 300 TB of Apple Xsan.

"Media Composer version 6 is now completely software-based and since we already have recent Mac Pro towers, all of the stations will be configured as dual-boot FCP/Avid edit bays," Raudonis said. "Our finishing rooms already use [AJA] KONA 3 cards, which now work with the new Avid software, so the only hardware required was the additional storage. Our strategy will be to start any new TV series on Media Composer. Existing shows will finish out their season on Final Cut and then transition to Avid at the start of the new season. Overall, I expect a six-month-long transition period."

How will this change affect the overall workflow on a show? "The transition should be pretty seamless for the editors," Raudonis said. "Most are 'ambidextrous' and know both Final Cut and Media Composer. This was a major factor in choosing Avid, so our workflow remains basically the same. Reality TV shows capture massive amounts of media in the field and, therefore, we have to use the classic 'off-line to on-line' workflow. I know that Avid excels in the kind of media management required for that. Since we've always used Pro Tools and have just upgraded those licenses to Pro Tools 10, we expect to see some advantages in the audio mix process. Our finishing bays used Apple Color, but that will be replaced with Avid Symphony, which our finishing editors know. The workstations will continue to use the existing KONA cards for outputting to tape."

Bunim/Murray Productions uses Pilotware software for the producers to log footage, so logging isn't dependent on one NLE or the other according to Raudonis. "The manner by which footage is logged won't change. We did purchase the Avid software with the ScriptSync and PhraseFind options, so I'm eager to see how that will benefit some of our shows."

In considering where to go if not FCP X, Adobe might have been another option, Raudonis said. "We are certainly familiar with Premiere Pro, because it's part of the Adobe bundles that were bought for After Effects," he said. "It's a good editor, but Avid software is best suited for the kind of group collaboration we require. We used to be an Avid shop and most editors who freelance for us know it. In fact, when we polled our editors about the possible alternatives, they were unanimously happy over a change back to Media Composer. That says a lot."

Raudinis said that Avid was able to give Bunim/Murray a "roadmap" for about the next year-and-a-half. "That is very important for a company like Bunim/Murray, especially when investing in a system that affects our day-to-day output," he said. "The hardware future is unclear, since no one knows when or if there will be any new Mac Pro towers or a suitable Apple replacement. Avid solutions are cross-platform, so if at some point we need to move over to PC towers for a new show, it's largely a matter of just changing out the tower. Everything else—software, storage, KONA card—stays the same."

When asked about his feelings in making the change, Raudonis summed up it up this way: "We changed once before from Avid to Final Cut and after some retraining, that proved to be a relatively smooth change. I see an even easier transition this time. We all liked cutting on the old Final Cut, but moving back to Avid is like getting re-acquainted with an old friend from college."