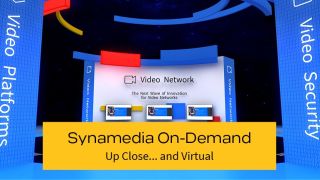 LONDON & ATLANTA—Synamedia this week announced a partnership with Thomson Broadcast and Triveni Digital to offer an ATSC 3.0 channel-in-the-cloud solution to advance broadcasters’ uptake of NextGen TV, as well as a new professional ATSC 3.0 RF and IP receiver for MVPDs.

“Our partnership was formed in response to broadcasters’ concerns over having to disrupt their current on-prem systems to trial ATSC 3.0,” said Elke Hungenaert, vice president of product management at Synamedia. “Our offering shows that a channel-in-the-cloud solution is readily available, while facilitating broadcast personnel to trial both operation and support of ATSC 3.0 with minimum disruption of their current on-prem systems.”

The 3.0 channel-in-the-cloud solution will help stations looking to trial and deploy NextGen TV quickly and cost-effectively without disturbing 1.0 operations before buying ATSC 3.0 equipment for their facilities, Synamedia said.

“In addition, the channel-in-a-cloud system we built is demonstrable as a disaster recovery scenario, whereby switchover from on-prem to cloud-based infrastructure can be shown with less than a two-second disruption of the consumer signal,” said Hungenaert.

The companies bring their own unique technologies and expertise to the solution. Synamedia is drawing on its encoding and packaging capabilities from its video network portfolio; Triveni Digital on its GuideBuilder and Broadcast Gateway; and Thomson on its tower transmission products.

“The ability to trial ATSC 3.0 channels in the cloud will be a game changer for station operators in terms of capex savings, beginning with deployments of ATSC 3.0 lighthouse configurations using the cloud,” said Triveni Digital President and CEO Mark Simpson.

PLUS: NextGen TV Poised to Break Out in Big Way in 2020

The solution also makes it possible for broadcasters to benefit from the NextGen TV standard’s ability to transmit IP packets over the air and over the top. “‘Channel in the cloud’ enables broadcasters to synchronize and orchestrate over-the-air transmission and cloud applications with an ATSC 3.0 signal, enabling a compelling, interactive and immersive experience,” said Aby Alexander, president, USA, at Thomson Broadcast.

Not only will the new receiver make it possible for cable operators to capitalize on the ATSC 3.0 market, it will act as a bridge between the IP-based NextGen TV standard and MPEG Transport Stream-based ATSC 1.0 standard by allowing them to receive signals from broadcasters correctly, the company said.

“The promised benefits of ATSC 3.0, including high-quality video and audio, cross-screen capabilities, targeted advertising and interactivity, are closer than ever to becoming a reality,” said Julien Signes, senior vice president and general manager, Video Network, at Synamedia. “Cable operators are well-positioned to augment the value of these new services, and the availability of an ATSC 3.0 receiver for MVPDs is the key to unlocking widespread adoption for ATSC 3.0,” he said.

In lieu of product demos that would have taken place at the cancelled 2020 NAB Show, Synamedia has placed video demos of its products online.