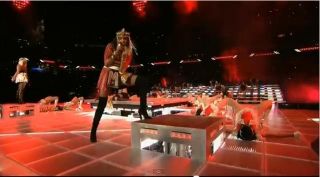 MULTIPLE CITIES: Once again, a split-second image of the Super Bowl half-time spectacle is getting more post-event press than the game itself. TV decency watchdogs are up in arms over the performer M.I.A. flipping the bird during Madonna’s performance, and NBC’s crew not catching it on tape delay in time to obscure it.

“NBC fumbled and the NFL lied because a performer known as M.I.A. felt it necessary to flip off millions of families. It is unfortunate that a spectacular sporting event was overshadowed once again by broadcasting the selfish acts of a desperate performer.”

Winter contended that the NFL “lied” because it had “formally told the PTC, and the American public, that the Super Bowl halftime show would be ‘appropriate.’”

The National Football League’s Brian McCarthy issued a widely publicized apology: “The obscene gesture in the performance was completely inappropriate, very disappointing and we apologize to our fans.” According to NFL.com, the League blamed NBC for not catching the singer’s gesture in time to digitally distort it. An NBC spokesman said it was “a spontaneous gesture that our delay system caught late.”

Indeed, the gesture was only a split-second, though seemingly aimed right at a live camera operator. The singer also appeared to verbalize a scatological term prohibited by the Federal Communications Commission for prime-time broadcast TV.

The incident recalls the 2004 Super Bowl half-time show when Janet Jackson’s breast was flashed for all to see in what was later termed a “wardrobe malfunction.” The FCC received more than 540,000 complaints about the performance and fined CBS and its affiliates $550,000 in a March 2006 Omnibus Order. The order was an indecency dragnet that levied a combined $4.5 million in fines for assorted verbal profanities and visual vulgarities. The CBS Super Bowl fine found its way in 2009 to the U.S. Supreme Court, which instructed a lower federal court to revisit its ruling in favor of CBS. That court--U.S. Court of Appeals for the Third Circuit in Philadelphia--ruled again in November that the fine was invalid because it was inconsistent with FCC policy at the time.

The legal skirmish leaves FCC indecency enforcement in the lurch. The commission temporarily deferred action on indecency cases after 2006, but later resumed investigating complaints with the caveat that “subsequent court decisions... have again raised questions about the commission’s indecency authority.”

The commission’s standing indecency rules are derived from Pacifica, a 34-year-old Supreme Court case ruling that regulation was appropriate because broadcast signals were “uniquely pervasive.” Under Pacifica, anything airing between 6 a.m. and 10 p.m. that describes or depicts “sexual or excretory organs or activities;” is patently offensive by community standards; and lacks artistic or educational merit, is subject to FCC fines. Those rules say nothing regarding obscene gestures, so the PTC is calling on the NFL and NBC to step up their own preventative measures.

“Either the NFL and NBC will take immediate steps to hold those accountable for this offensive material in front of a 100 million Americans, or they will feebly sit back and do nothing” Winter said. “The nation--and the PTC--is watching.”

Sunday’s Super Bowl between the prevailing New York Giants and the New England Patriots garnered an overnight rating of 47.8 for NBC, according to Nielsen. The numbers came in just a hair shy of last year’s 47.9 percent for Fox’s Super Bowl telecast, which tied with CBS’s coverage of the Giants win over Denver in 1987.
~Deborah D. McAdams