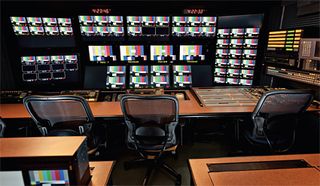 LOS ANGELES—Manufacturers are simplifying 3D projects by powering up their production switchers and automating more functions.

All Mobile Video bought Sony's new MVS-8000X production switcher at the 2010 NAB Show and had it installed in the company's new Epic 3D truck shortly thereafter.

"When you explain to someone that it's 200 in by 100 out and then you look at how small the frame is, it's pretty impressive," said Lee Blanco, director of engineering for the New York-based mobile production company. In addition to the vastly increased number of I/Os and M/Es, Blanco said he was impressed by its bandwidth-optimizing 3G capability and the edge it gives to 2D production. "It becomes an incredible multitasking switcher—it gives you a lot of flexibility."

Glenn Hill, Sony's senior engineering product manager for this equipment sector, pointed out a few more perks, including the ability to transmit left and right eye video to the switcher on a single cable.

In addition, he said the depth of digital effects—like an over-the-shoulder box— can be adjusted by a single knob. Video inputs can be automatically switched to offset cabling errors. And, due to its interface with other Sony equipment, it will alert the technical director if a camera or graphic is out of depth.

Sony’s newest 3D-capable switcher, the MVS-8000X, in All Mobile Video’s Epic 3D mobile unit. Freely uploaded software upgrades will continue into 2011. "We've got another release in January," said Hill. "And there should be another release in March."

Baldock cited four new features of the v2.0 software for the newest switcher, Kayenne. "Source Rules" automatically turns keys on or off on PGM and PST busses when the source is selected. "Multiple Buss" linking selects sources on various M/Es or DoubleTake partitions with a single button press. "Key Chaining" automatically brings up two keyers that adjust left and right eye video for convergence. And "Quick Link" tabs provide easy access to the most commonly used menus.

Freelance Technical Director Colby Bourgeois was particularly impressed with Key Chaining, which was not available when he worked on Fox Sports' 3D test run of NFL coverage in December 2008 and this year's MLB All Star Game in 3D. Prior to Key Chaining, the TD created macros to lock the right eye view to the left, and pressed the two macro keys simultaneously during the show.

"Now there's a significant savings of time —minutes versus an hour or so of setting things up," said Bourgeois. "It's so simple to set up and make changes—it takes away the guess work."

Less stress is probably the main benefit from this new feature.

"The pace of shows today doesn't allow for us to slow down and think about the tasks—when the switcher can take a complex task and make it simpler, it's always helpful," he said. "The switcher takes in the two signals and does the exact same work to them—a transition, keying, wipe—at the same time. The two eyes will be perfectly in time."

Timing is everything in 3D, where the production crew's monitors are fixed on the left eye view.

"For the most part, the left eye is what everybody's looking at," said Bourgeois. "That's why it's essential for the TD to be monitoring with both eyes—the TD's often the last in the line of defense for quality control."

"Key Chaining allows us to create a 4:3 graphic show as well as a 16:9 graphic show—one for the Fox network and one for the NFL and cable providers --with the Fox Box in a different location," he said.

Ross Video's Vision Octane is also 3D ready. The switcher is capable of a full 8 MLE's in the 8RU Octane chassis that can have 96 inputs and 48 outputs; in stereoscopic operation, Vision Octane can provide a full 4 MLEs with 4 Keyers each, 12 Channels of 3D DVE and 18 Channels of Media Store.

"Live 3D production on our flagship Vision production switchers is easy," said Nigel Spratling, marketing product manager, communications, switchers for Ross Video. "MLE's can be married together and their sources mapped independently. Once paired, both MLE's are operated in tandem from the same MLE control surface on the Vision panel. A DVE effect in Z space will appear spatially correct."

And, he said, Vision's production engine can be purposed for 3D, offsetting concerns about reduced capacity.

"In stereoscopic operation, Vision Octane can provide a full 4 MLEs with 4 keyers each, 12 channels of 3D DVE and 18 channels of Media Store," he said.

U.K.-based Snell also includes 3D capability in its Kahuna production switcher. In July, the company announced that Broadcast Solutions GMBH, a German designer/manufacturer of custom DSNG and OB vehicles, installed its Kahuna production switcher in its new 16-camera 3D/HD broadcast truck. "Kahuna is truly unique in the market for its integrated ability to handle 3D switching in parallel with all other format sources," Stefan Breder managing director of Broadcast Solutions.