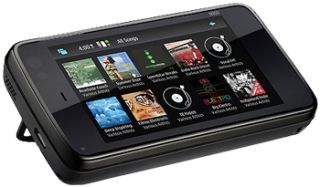 Ludwig’s announcement misattributed the standard to the Open “Mobility” Video Coalition, which it said has been “adopted by over 900 commercial and public television stations.” The company also confuses digital television with high-definition TV in describing its technology:“The patented technology is unique in that it utilizes a ‘carousel’ that interleaves information streams in a repeating pattern for inclusion into a digital video broadcast--also known as HDTV. In the case of Ludwig’s data carousel its uniqueness is defined by multiple dynamic digital audio programs, not just one.”

The One Radio is said to be about the size of an iPhone and compatible with “off-the-shelf” docking stations. There is no information on the release date for The One, nor for how much it will cost. Ludwig compares it to Sirius/XM, with a one-time rather than a monthly subscription fee.

“The primary source of income to Ludwig is from advertising and the sale of syndication time,” the company’s Web site says.

The company was formed in 1988. It went public in 2006, and has been angel-funded for the last three years, according to the Web site. Its board chairman is Haitian radio entrepreneur Jean Cherubin. As recently as 2008, it was located in Sparks, Nev., according to a Securities and Exchange filing. It trades on the Pink Sheet (LUDG) for around 3 cents.
-- Deborah D. McAdams