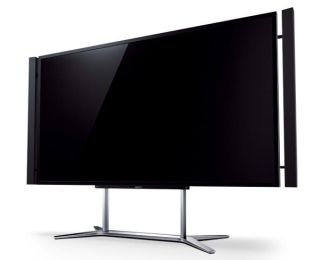 Sony announced this week an 84in 4K television set that features a resolution of 3840 x 2160 pixels and comes with a detachable 10-driver virtual 5.1 surround sound speaker system. The resolution is four times that of standard HD sets.

The TV will ship later this year, Sony said, and was designed to offer a home theater experience to match the latest digital cinema technology. No price was offered, but it’s expected to be significantly more expensive than today’s top models.

The Sony model XBR-84X900 features smart TV capability and proprietary upscaling technology that the manufacturer said will ensure that “every frame looks clear and crisp with a 4K resolution regardless of the content source.”

The set leverages a Quad Full High Definition (QFHD) design that receives native 1080p content and employs a “pixel doubling” of the 1920 x 1080 resolution to achieve noticeably improved performance. Such upscaling is necessary since there is still a widespread lack of native 4K content for home viewing.

At a press conference announcing the television set in New York, Sony COO Phil Molyneux was asked about the lack of 4K content available to viewers. He essentially noted that content always catches up. “We always get this question when we launch beautiful new technology,” he said “Where’s the content? Did we bring the content to market? Yes, we did.”