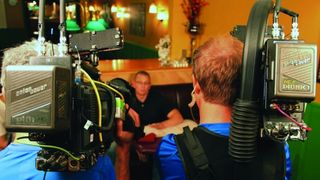 ShootersINC, a Philadelphia-based production company, is using Anton/Bauer DIONIC HCX and HyTRON 140 power for its clients' reality television, political spots and other projects.

Many of the productions ShootersINC handles unfurl at a frenetic pace, especially when it comes to reality programming, as every piece of production equipment, including batteries, is put through the paces with crew members twisting and jostling among crew on the set, angling for key shots of the action.

For example, for each episode of the reality series "Restaurant: Impossible," which ShootersINC produces for The Food Network, crew members operating cameras must follow British chef Robert Irvine, the restaurant's owner and restaurant employees, as they move around the various areas of a failing restaurant in their efforts to revitalize it within two days.

"We're constantly recycling the batteries, and they just keep on working," says Craig Needleman, principal and director of photography for ShootersINC. "We cycle them through, and you know at the end of the day you will have enough power — they charge fast and work great." Needleman added Anton/Bauer batteries are sturdy, which is important in a production environment where they can be thrown on the floor of a car or shaken.

The longevity of the batteries can be a lifesaver for the political programming ShootersINC produces for its clients. The company has filmed President Barack Obama and First Lady Michelle Obama in the White House — a situation where a battery failure would be disastrous.

"You can't run out of battery power during the President's speech," notes Needleman. "There is no second chance to get back into the White House, so you want to know that the batteries you bring in with you are going to get the job done."

Currently, ShootersINC uses the Anton/Bauer HyTRON 140 batteries with its Panasonic AJ-HDX 900 cameras. The cameras have wide-angle lenses, making them front-heavy, so the HyTRON 140s balance out the cameras nicely. ShootersINC also recently began using DIONIC HCX batteries, which can power their cameras running an onboard light, video transmitter and wireless audio receivers. ShootersINC, which has used Anton/Bauer power for 30 years, also employs the Anton/Bauer QUAD 2702 PowerCharger and Gold Mount accessories for its productions.