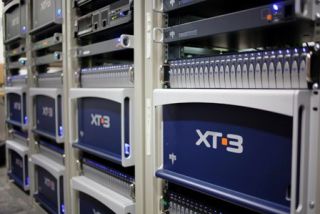 LONDON—Video servers are so central to modern sports broadcasting it’s easy to forget that just 15 years ago they were just starting to make an impact. In more recent years, the speed, workflow and networking aspects of server-based ingest and production have allowed broadcasters to keep up with rapidly expanding, complex content needs.

The OBS Media Server is composed of XT3 servers for ingest, production and playout, and a central XStoreSAN offering a capacity of 6,500 hours HD.
In London, host broadcaster OBS deployed more than 30 EVS XT3 servers and a massive XStore SAN in London’s International Broadcast Centre (IBC), with many more EVS servers at venues throughout Great Britain. More than 400 servers in total were used.

This staggering statistic reflects the fact that all material—every minute of every event, every medal ceremony, every OBS interview with athletes and coaches, and more—will be available to rightsholding broadcasters (RHBs) throughout the two-plus weeks of the broadcast. In Beijing, material had to be deleted from the server every three days.

EXPANDING THE REACH OF THE GAMES
OBS’ thoughtful deployment of a server infrastructure also provides real benefits to RHBs hungry to fill channel capacity and new platforms with compelling content. Services that had been launched in Beijing or Vancouver that were expanded in London include:

OBS is using 50 EVS IPLogger stations, the logging module of IPDirector, to log all live feeds coming in from different venues and recorded into the media server.
• A Browse Service that allowed RHBs to look at low-res browse copies of content using an EVS IPDirector module station (IPBrowse), before picking only needed content for HD delivery to an EVS server in their facility.

• The ONC, a ready-to-air news channel broadcasting 24 hours per day for the entire length of the Games. Content includes sports highlights, athlete interviews and other features and is played out using EVS XT3 servers controlled by IPDirector. The workflow relied on a server infrastructure, and new in London was an iPad app from EVS called iXT that allowed producers at a venue’s interview zone to tag video and create clips directly in the central media server with metadata related to the content.

• One service that saw significant expansion was the Multichannel Distribution Service (MDS), which provided 10 ready-to-air channels of competition plus the ONC via satellite. OBS used the rapid turnaround inherent in the massive server system to populate the MDS with a mix of live and recorded content. Twenty-some broadcasters of all sizes used the MDS service in Vancouver; in London, more than 90 broadcasters saw its value as a tool to broaden the content they could offer their viewers.

• Touching the future, OBS made available a new service called IPBrowseWeb, which may well be the “next big thing” in big event international broadcasting. IPBrowseWeb allows producers and production personnel located offsite to browse content, create clips and even retrieve content with minimal delay over standard Internet connections, which means more bodies can stay at home… so transportation and housing costs will be less.