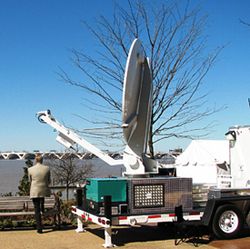 The Satellite 2010 Conference and Exhibition (March 15-18) opened to spring like weather and a record crowd, with more than 9,500 persons from more than 70 countries registered for the event.

This year’s show was held for the first time at the new Washington, D.C. area Gaylord National Hotel and Convention Center in Oxon Hill Md., and featured programs ranging from 3D television, industry financial matters, and interference to satellite transmissions.

The show also included an exhibition of products and services from more than 300 companies. This year, for the first time, exhibitors displayed their wares both inside the convention center and outside on a terrace overlooking the Potomac River.

Conference activities also included recognition of satellite industry pioneers and the honoring at a Wednesday luncheon of Peter Shaper, chief executive officer of CapRock Communications, as the Satellite Executive of the Year.

This year’s Satellite 2010 event was held in conjunction with the Mobile Satellite Users Conference (MSUA), with the groups sponsoring several overlapping events.