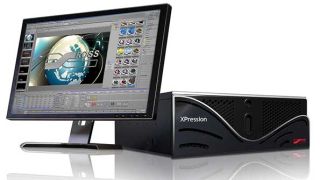 A dual channel XPression was used with one channel displaying a crawl broken into 8 layers on the screen that were then remapped into a single continuous crawl on the arena’s ribbon board. The second channel of XPression was used for two more crawls and to display a collage of 80 photos.

At any given time 66 data feeds were coming into XPression (with avatar images) via XPression’s Datalinq Server. A second XPression was used to display a U.S. Debt Clock graphic, also linked via an RSS feed from Datalinq.

In addition to live events, XPression is used by broadcasters and production professionals around the world for news, sports, branding, and virtual set/augmented reality applications. Powered by the latest gaming technology, XPression is known for its graphics horsepower and ease of operation.