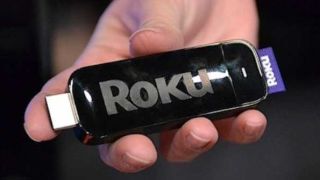 With Internet-connected TV sets one of the hottest categories of television sales, it seems only natural that someone would figure out how to upgrade conventional non-connected television sets for Internet reception. Apparently, Roku will be one of the first players at the gate.

When paired with a TV set, the Roku Streaming Stick integrates the Internet apps seamlessly into the TV user interface, allowing customers to use the TV remote for all streaming activities

Set to launch in the coming weeks, the Roku Streaming Stick is being billed as a low-cost way for companies to add a streaming platform to a device that features a Mobile High-Definition Link (MHL). To make it clear for potential buyers, “Roku Ready” devices such as HDTV sets, receivers and Blu-ray players will not only be stamped with a logo to show they’re compatible, some will arrive with the Roku Streaming Stick itself in the package.

The Roku Streaming Stick is a tiny, wireless streaming player that is the size of a USB flash drive. It features built-in WiFi, a processor and solid-state memory. Its software will be updated on a regular basis, free of charge.

Once plugged into an MHL-enabled device, the Roku Streaming Stick will stream video and music as well as enable casual game play from the more than 500 entertainment channels available on the Roku platform.

When paired with a TV set, the Roku Streaming Stick integrates the Internet apps seamlessly into the TV user interface, giving the customer the ability to use the TV remote for all streaming activities.

“Manufacturers recognize the value in making products that stream entertainment, yet it is very difficult for them to deliver and sustain a vibrant, robust streaming platform on their own,” said Chas Smith, vice president of business development at Roku.

“The Roku Streaming Stick adds instant access to the leading streaming platform with virtually no overhead from manufacturers, while giving consumers the best streaming experience available.”

MHL is a new standard that is seeing wide adoption by consumer electronics manufacturers. MHL resembles HDMI in appearance but unlike other connectors, it delivers critical elements for connected devices like the Roku Streaming Stick.

Roku said pricing and delivery dates for the Streaming Stick would be announced at a later date.