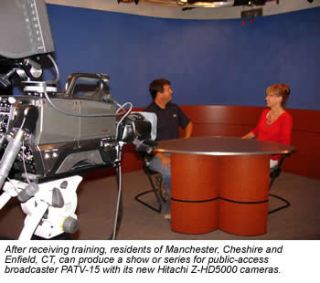 Residents in Cox Communications’ three franchise areas — Manchester, Cheshire and Enfield, CT — can produce a show or a series for air on PATV-15 after taking a television production-training course. This make user-friendliness was a key concern in camera selection.

After they receive basic video training from PATV-15 production technicians — including Greg Thresher and Laurie Batignani — the new producers are able to truck the pedestal-based HD cameras around the studio and pan, tilt and zoom.

PATV-15 carefully considers large equipment purchases like this because it hopes to keep the gear in service for at least 10 years, said Chris Giard, PATV-15 video engineer. The Hitachi cameras were selected because of the service the public access channel has received over the years from Hitachi and the price-performance of the Z-HD5000, he said.

Budget constraints prompted PATV-15 to tackle the HD studio upgrade in three phases, including the cameras in phase one. Cox will then added a Broadcast Pix Mica or Granite HD production switcher among other production gear and full HDTV distribution in the other phases of the project.

Because Hitachi Z-HD5000’s are native multistandard cameras — with integrated format conversion — PATV-15 operators can shoot in HD today and output downconverted 4:3 480i SD-SDI video until the broadcaster has completed its entire HD workflow. In the future, Cox intends to buy additional Hitachi Z-HD5000’s to convert its Cheshire and Enfield studios to HDTV.

While new HD lenses are on the station’s wish list, Giard reports that the Hitachi Z-HD5000 cameras produce superior image quality and meet PATV-15’s technical specs even with SD lenses.