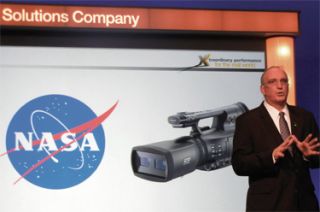 John Baisley discusses how Panasonic camcorders will document the ISS in 3D.
That Panasonic is committed to its P2 recording system was evident at the NAB Show debut for P2 HD cameras, decks, drives and archiving software.

Under the banner "Extraordinary Performance for the Real World," Baisley showcased some of Panasonic's real-world users, including NASA, which is using AG-3DA1 3D camcorders, BT-3DL2550 3D LCD monitors and Toughbook laptops to document the final Space Shuttle flight, mission to the International Space Station scheduled for June. NASA astronauts will use the 3DA1 to document the ISS in 3D.