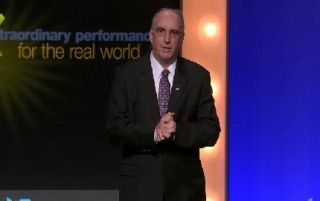 LAS VEGAS: Expect no disruptions to the Panasonic media supply chain. That was the message from John Baisley, executive vice president of Panasonic Solutions Co.

“I would like to especially thank you all for your interest in the status of our parent company since the earthquake and tsunami that struck on March 11,” Baisley said of the Tokyo-based corporation. “We have received many questions about Panasonic personnel and infrastructure . . . the amount of devastation in some areas of Japan and the human toll remains incomprehensible.

“From a business perspective, I’d like to share with you the impact of the earthquake and tsunami on Panasonic Broadcast business. Although our factories came away from the disaster relatively unscathed, we are having issues with component suppliers that were located in the affected area of Japan. We are still working on model by model impact, but suffice to say, we will experience some product availability issues in the short term.

“From a media standpoint, we should not have any issues with P2 cards, and our tape availability is unaffected,” he said.

Baisley then turned to conditions in the United States, noting the economic rebound of 2010. Local TV stations logged increased revenue during the year that resonated within Panasonic, he said. The local news migration to HD continues to be a driver for P2. The latest deal involves Sinclair Broadcast Group, which is outfitting news shooters with AG-HPX370 P2 shoulder-mount camcorders in the 12 markets where its stations produce local news.

NFL Films is another recent taker. The sports franchise production company is tapping P2 in its move from tape- to file-based acquisition. The P2 gear will be used for “game coverage-related sound footage and interviews” and “non-football production work,” the company said.

On a more cosmic plain, Panasonic 3D gear will be used by NASA to document the June 28 launch of the Space Shuttle Atlantis. NASA is using Panasonic’s AG-3DA1 camcorders, its BT-3DL250 25.5-inch LCD monitors and ruggedized Toughbook laptop computers to capture the training and preparation for the final mission of the Space Shuttle program.

Finally, Baisley announced that Panasonic’s DVCPro would be used as the official recording format of the London 2012 Olympic Games. Host broadcaster Olympic Broadcasting Services London will use AJ-HPX3100 P2 HD camcorders and AG-HPD24 P2 portable recorders to support the broadcast.

(See Panasonic’s 2011 NAB product introductions at “Panasonic in a Nutshell.”)