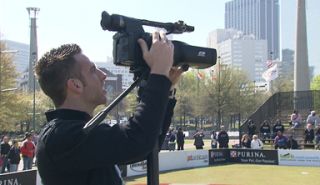 SECAUCUS, N.J.: Panasonic announced the use of their AG-3DA1 full HD 3D camcorders in covering this year’s Eastern Regional of the Purina Incredible Dog Challenge.

Filming was headed up by west central Florida’s Tampa Digital production company. The footage was used to create a 3D video to be screened at other regional competitions and is available on social media site BarkNetwork.com.

Using the Panasonic AG-3DA1 proved itself simple yet effective. “Prior to the Eastern Regional, I had really overthought the 3D shoot,” said Ryan Kindle, broadcast director for Tampa Digital, in a press release. “I labored over how to set depth and convergence, but once the 3DA1s arrived on the set it was so simple, all right there in the camera. [They] are exceptional in their portability and flexibility. We were using freelance videographers, who were able to walk on location, pick up the 3DA1s and shoot for six hours straight.”