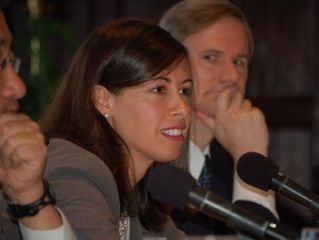 Ajit V. Pai (below, right) is a partner in the Litigation Department of Washington, D.C. office of Jenner & Block LLP. He previously worked in the FCC Office of the General Counsel.

Both likely will support the National Broadband Plan, Rosenworcel in a 2010 discussion at the Wharton School of Business addressed FCC authority to impose Net Neutrality under current statue:

“I think when you push all the political rhetoric aside, what you’ll find is nobody, no matter, where they sit on this debate, is really interested in applying a series of old-style telephone rules to new-fangled broadband services. The important thing in the end is to identify not so much which title all of these services fit in as what your principles and priorities are.... How to we make sure that broadband is ubiquitous? How do we make sure consumers are protected? How do we make sure public safety officials... have access to the networks they need.... How do we make sure that we provide proper incentives for private investment?”

During his commission tenure, Pai was involved in network neutrality, spectrum auctions, the Sirius-XM merger and media ownership matters. He argued for program access rules in National Cable & Telecommunications Association v. FCC in the D.C. Court of Appeals, one that the FCC won. He was associate general counsel for Verizon from 2001 to 2003.

National Association of Broadcasters chief Gorgon Smith issued the a brief statement acknowledging the nominations: “NAB congratulates Ajit Pai and Jessica Rosenworcel--two talented individuals with a commitment to public service--for their nomination to the FCC.”

FCC Chairman Julius Genechowski said, “President Obama made two outstanding choi8ces for the commission and for the American people. Given their talent, leadership and expertise in our space, they would both plan an invaluable role at the FCC.”

Rosenworcel initially joined the FCC in 1999 after two years as a communications associate at Drinker Biddle and Reath. She graduated from Wesleyan University and the New York University School of Law.

Pai began his career as a law clerk to Judge Martin L.C. Feldman of the U.S. District Court for the Eastern District of Louisiana, and then as an Honors Program trial attorney in the Telecommunications Task Force at the U.S. Department of Justice’s Antitrust Division. He holds a B.A. from Harvard University and a law degree from the University of Chicago. He is a member of the D.C. and Kansas bars.