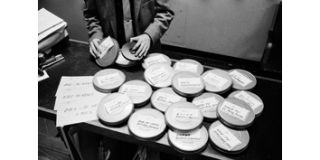 NEW YORK: Today is World Television Day, as proclaimed by the United Nations in 1996.

“Everything we experience through television shapes and influences our lives,” the U.N. said. “Television educates, informs, entertains, instructs, and influences us in so many ways. The youth are greatly influenced by images and we can expect new value systems to emerge among them.”

The United Nations held the first World Television Forum Nov. 21-22, 1996, ”to discuss the growing significance of television” in the world and how it might enhance “mutual cooperation.” The General Assembly decided to proclaim Nov. 21 World Television Day.

“This was done in recognition of the increasing impact television has on the process of decision-making,” the U.N. said. “Television was thus acknowledged as a major tool in informing, channeling and affecting public opinion. Its impact and presence and its influence on world politics could not be denied.”

Of the medium, U.N. Secretary-General Kofi Annan said on World TV Day in 2003: “Television can be a tremendous force for good. It can educate great numbers of people about the world around them. It can show us how much we have in common with our neighbors, near and far. And, it can shed light on the dark corners, where ignorance and hatred fester. The television industry is also in a unique position to promote mutual understanding and tolerance—with content that tells the stories not just about the powerful, but about the powerless, and not just about life in the world’s richest pockets, but also in the developing countries that are home to the majority of the world’s population.”

(Image of UNTV programs being prepared for shipment to television stations in many parts of the world, Nov. 1, 1957, courtesy of the U.N.)