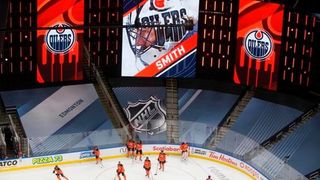 TORONTO & EDMONTON—The puck dropped on the NHL’s return to play this past weekend, with the first slate of games for the adapted NHL Playoffs taking place on Aug. 1 and 2. After previewing some of the elements of the broadcasts, fans got their first real look at how a hockey game without fans would be presented to them.

Because of the COVID-19 pandemic, the 24 teams participating in the NHL’s restart are divided into two hub cities—12 Eastern Conference teams in Toronto, 12 western Conference teams in Edmonton—where they will play all of their games with no fans in attendance. This has allowed for some creativity by the broadcasters on how to present game action as well as other elements for fan engagement.

There are 32 cameras setup throughout the arenas for the broadcasts, slightly more than a traditional game pre-COVID. This includes a “JitaCam,” a 360-degree camera with a rotating arm that provides a different type of angle from underneath the main scoreboards. As things get deeper into the playoffs, the broadcasters are expected to experiment more with utilizing these different angles and setups for presenting game action.

The league has also changed the look of the arenas for new visual offerings. Seats in the lower section have been covered, and a number of large video monitors have been installed in the corners of the rinks, providing visual content from the individual teams and league. Broadcasters would also use these screens for outros to commercials, sometimes having replays of goals or big plays shown on them.

Visuals aren’t the only thing being added to the broadcasts. Using a library of sounds provided by EA Sports, which creates the officially-licensed NHL hockey video game, there was some base crowd noise that was used during play. Teams’ also got a reminder of home as goal horns and songs that are used in their home arenas would be played when they scored. There would also be shots of fans cheering from home for their team on a few occasions worked into the broadcast.

Beyond the look of things on the ice, the announcing crew has also had some adjustments made to it. Most notable is the rinkside reporters. NBC’s Brian Boucher and Pierre McGuire were both placed in Plexiglas-contained areas along the benches. Also, Doc Emrick, NBC’s lead broadcaster for the NHL, was broadcasting remotely from his home rather than in Toronto or Edmonton. Then, interviews taking place during intermission were done over Zoom.

“What’s interesting here is how COVID is essentially creating the opportunity and the environment in which broadcasters can try things a little bit differently,” Mike Naraine, an assistant professor with Brock University’s department of sport management told the Preeceville Progress. “(They can) add a couple more pieces to the pie that they wouldn’t traditionally have that opportunity to (do) for fear of ostracizing the audience.”

It’s not just the hub cities of Toronto and Edmonton that are attempting to provide a different look for fans. The Philadelphia Flyers announced that they have created a second-screen viewing experience for their fans using Tata Consultancy Services. Developed as a companion to the normal NBC Sports Philadelphia and NBC Sports Network broadcasts, Flyers Home Ice is meant to deliver Flyers in-arena content to simulate the experience of being in the team’s home arena.

The NHL Playoffs will take place from now until October.

This story utilized reports from the Preeceville Progress and NHL.com.