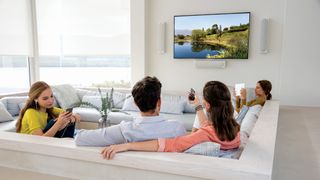 LOS ANGELES—TV viewing habits are actually poised to go up in a post-coronavirus world, according to a new survey from E-Poll.

Nielsen forecasted at the beginning of the stay-at-home orders that content consumption would rise significantly during this time. According to a new report from Nielsen on streaming video viewing on TVs from March 23-April 19, U.S. audiences reached 654.6 billion minutes; a comparable four-week period in 2019 saw 301.4 billion minutes.

Another factor into why TV and streaming viewing may continue to be popular even after coronavirus is that people reportedly will be concerned about attending large gatherings, including entertainment offerings like movies, concerts and sporting events.

As far as when things might return to normal, a third of E-Poll respondents said they expect that to happen in the next three months. A majority think that it will take six months or longer.