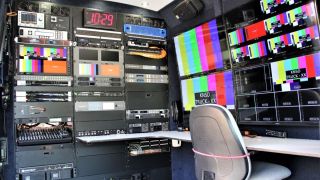 SAN DIEGO—KNSD-TV and KUAN-LD, Comcast’s NBCUniversal and Telemundo stations in San Diego, have deployed a self-contained mobile TV studio in a new broadcast truck outfitted to enable the stations to have a backup in the event their main broadcast studios ever need to be evacuated—something that was a real possibility during the height of the COVID-19 pandemic.

The vehicle, built by Accelerated Media Technologies (AMT) of Auburn, Mass., enables the stations to work fully independently in the field, processing, editing and distributing live raw video without even needing to rely on a skeleton crew or technology located in their studios.

A key component of the new vehicle is a full complement of technology from Dejero, including the M6E6 network aggregation tool, PathWay E encoder and WayPoint 104 receiver. Together, they give the truck the connectivity to operate autonomously from the studios if required.

“We are thrilled with our new truck and are particularly impressed with the power and flexibility of the Dejero equipment, in particular the GateWay network aggregation device,” said Mike Fouch, manager of technology at NBCUniversal Media, KNSD-TV.

Before taking delivery of the truck, the broadcaster would have needed an encoder/transmitter to access cell networks, ENG or SNG and receive a signal, but the Dejero GateWay provides the vehicle with connectivity to access the stations’ studios, if desired, via private networks, the public internet and the cloud, he explained.

“So now, the field team can be autonomous and rely less on those back at the station to manage content,” said Fouch.

Likening the vehicle to a Swiss Army Knife, the broadcaster wanted a vehicle capable of switching a newscast if the studios were inaccessible and of receiving multiple channels of cellular video data.

To overcome the challenge of getting significant bandwidth to the truck to receive assets from the field and relay them via cellular or satellite without taking on another high bandwidth service plan, the station turned to Dejero’s Smart Blending Technology, which aggregates wired and wireless IP connections from various sources simultaneously to create a virtual network of networks. The result is more reliable connection paths, expanded coverage area and greater bandwidth.

Testing the solution in an area with spotty cellular coverage, Tom Jennings, president of AMT, was confident Dejero’s Smart Blending Technology could satisfy the broadcaster’s requirement.

“Having tested the system personally in the rural hills of Montana where cell frequencies can barely be counted on to make a normal phone call, I experienced data rates upwards of 30 Mb/s constantly and without linking to a satellite,” he said.

“Overall, Smart Blending Technology has helped transform the once behemoth DSNG truck into a highly maneuverable, cost-effective platform that requires less formal training to operate. It has expanded the reach and quality of news trucks on the road,” said Jennings.

The Dejero Gateway continuously measures the availability of bandwidth on each connection in real time and dynamically distributes IP packets across the connections. Doing so makes it possible to achieve up to 100Mb/s upload and 250Mb/s download, Dejero said.

The new truck uses the Dejero Gateway-aggregated bandwidth for reliable connectivity to access the internet, cloud applications like Latakoo for ENG video and AWS WorkSpaces to access the station and private networks from locations where crews from both stations are working, the company said.