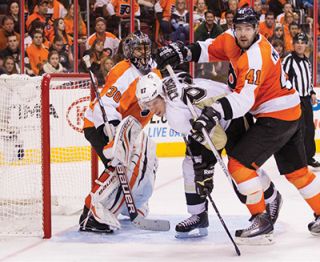 NEW YORK—NBC and Canada’s CBC-TV celebrated the belated return of NHL hockey by launching technological innovations. At NBC, the first broadcast on Jan. 19 was anchored by the first “NHL Live” broadcast from the NBC Sports Group’s new 300,000 square-foot International Broadcasting Center in Stamford, Conn. At CBC, “Hockey Night in Canada”’s return included the introduction of “Hockey Night in Canada: 2nd Screen,” an interactive social media feature staged in real-time during the broadcast.

IBC READY FOR ITS CLOSEUP

Currently being built inside a renovated former Clairol hair color factory, the NBC Sports Group IBC and headquarters will be the new home of NBC Sports, NBC Sports Network, NBC Olympics, NBC Sports Digital and NBC Sports Networks. The consolidation brings together NBC’s sports operations based at Rockefeller Center in New York and Landmark Square and Harbor Drive in Stamford with Comcast’s sports properties at the Comcast Center in Philadelphia.

“It’s the first time since we merged with Comcast that all of our sports properties will be under one roof,” said Dave Mazza, senior vice president and CTO of NBC Sports Group and NBC Olympics. When completed later this year, the IBC will be home to more than 500 employees, working out of six studios, six master control rooms, one newsroom, 50 edit rooms, and 50 graphics stations. Renovation of the former shampoo factory began in February 2012. When finished, the IBC will have more than 1,000 miles of broadcasting and networking cable deployed across its 33-acre campus.

NBC’s state-of-the-art NBC Sports Group International Broadcast Center in Stamford, Conn. began studio operations last month with “NHL Live,” featuring (L to R) Liam McHugh (host) Mike Milbury (analyst) and Keith Jones (analyst). After news of the NHL’s return to hockey came out in January, NBC scrambled to get one of the three recently completed studios checked out for air. Given that the new facility was spurred into life by NBC/Versus signing a 10-year deal with the NHL in 2011—committing NBC to build a studio for the NHL Network—pushing up the deadline made sense. Still, “it was a scramble during the past two weeks,” said Mazza. “We had to do all the final checks of the finer points, such as the monitor walls, lighting, transmission feeds in and out of the building.”

Despite the last-minute scramble, the first IBC broadcast of “NHL Live” “was surprisingly uneventful,” Mazza said. “The guys from the SportsNet [formerly Comcast SportsNet] facility had been coming over for two to three weeks, getting things configured to their liking. By the time Jan. 19th arrived, they had already blocked their shots in-studio, and were quite comfortable when we went to air.”

The late start of the 2012-2013 NHL season marks the 60th year of telecasting for Hockey Night in Canada (HNIC), still one of this hockey-mad country’s most popular programs. To mark the occasion, the CBC is plunging into live social media with its “Hockey Night in Canada: 2nd Screen” (HNIC:2S) app.

Designed for viewers watching the game at home while glancing at their smartphones, tablets, or laptop computers, HNIC:2S is a serious attempt to keep these eyeballs completely glued to the CBC’s product. During the broadcast, viewers log into HNIC:2S via their Facebook accounts. Once online, they can answer skill-testing questions, predict team/ player performance to win prizes both weekly and at season’s end, plus connect with other fans via Facebook and Twitter in real time. HNIC:2S also includes a live NHL scoreboard of all games being played at the time, a live Twitter feed from the broadcast, and a schedule of upcoming HNIC broadcasts on CBC.

In the near future, HNIC will be made available to Xbox viewers. CBC is tailoring a package of content for this particular audience, including “near instant” three-minute highlight packs after each game, scores, schedules, and a Weekly Top 5 featuring the best saves, goals and plays of the week.

Of course, some things won’t change at HNIC. One of these is commentator Don Cherry, former Bruins coach and an icon among Canadians for his plain-spoken views. Speaking on HNIC’s Jan. 19 return, Cherry said, “I suggested and guaranteed you that they [the NHL] would start January 15th. I was four days out. Guaranteed! The only one!”

Another is “Hockey Night in Canada Punjabi” (HNICP) and its weekly Saturday night doubleheader. Hosted by Harnarayan Singh with analysts Bhola Chauhan and Inderpreet Cumo, HNICP is broadcast nationally via Canadian cable and satellite TV carriers, and online at CBCSports.ca. According to the 2011 Canadian census, Punjabi is the most-spoken-at-home immigrant language in Canada, followed by Chinese, Cantonese and Spanish.